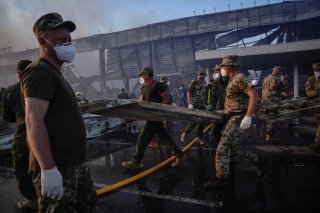 Ukrainian president Volodymyr Zelenskyy said up to 1,000 people were in the mall when air raid sirens went off, according to CNN. "Fortunately, as far as we know, at that time, many people managed to get out, but there were still people inside—workers and some visitors," he said. Zelenskyy condemned the strike as “one of the most daring terrorist attacks in European history.” “Only totally insane terrorists, who should have no place on earth, can strike missiles at such an object. And this is not an off-target missile strike, this is a calculated Russian strike—exactly at this shopping mall," Zelenskyy added.

Ukraine's foreign minister, Dmitro Kuleba, called for further punitive measures against Russia in the strike’s aftermath. “Russia is a disgrace to humanity and it must face consequences. The response should be more heavy arms for Ukraine, more sanctions on Russia, and more businesses leaving Russia,” he tweeted.

The Russian Defense Ministry framed the Krememchuk strike as an attack on a nearby weapons depot. "On June 27, the Russian Aerospace Forces delivered a strike by air-launched high-precision weapons against hangars of weapons and ammunition from the United States and European countries in the area of the Kremenchug road machinery factory in the city of Kremenchug in the Poltava Region," claimed Defense Ministry spokesman Lt. Gen. Igor Konashenkov on Tuesday, according to Russian state news. "The detonation of the stored ammunition for Western weapons caused a fire at a defunct shopping mall located close to the factory’s territory," added Konashenkov.

Russian foreign minister Sergey Lavrov reiterated Moscow’s claims at a meeting of foreign ministers of the Caspian States, telling reporters that the Russian Defense Ministry “clearly and understandably conveyed” what really happened. “They bombed the hangar, where European and American weapons and ammunition arrived. As a result of the detonation of ammunition, an empty shopping center standing nearby caught fire,” the foreign minister said. Lavrov added that Russian forces will continue conducting similar strikes in Ukraine as long as the West keeps on supplying Kyiv with military aid.

Ukrainian authorities rebuffed the Kremlin’s claim that the shopping mall was empty, citing alleged eyewitness accounts from locals. French president Emmanuel Macron said Tuesday that Russia “cannot and should not win” the war in Ukraine and described the strike as a “new war crime.” British prime minister Boris Johnson said the “appalling attack” has “shown once again the depths of cruelty and barbarism to which the Russian leader will sink.”