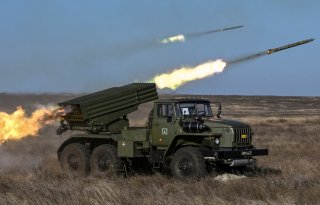 Russian forces are consolidating their control over the key eastern city of Severodonetsk and inching closer to encircling Lysychansk.

Serhiy Haidai, the governor of Luhansk, said on Thursday that Russian forces have captured the nearby villages of Loskutivka and Oleksandrivka in their attempt to encircle Lysychansk, a town separated from nearby Severodonetsk by the Siverskyi Donetsk river. "The Russians are approaching Lysychansk, entrenching in nearby towns. The city is being shelled by aircraft," Haidai said, adding that the Russian military took up positions in several villages immediately to the south of Lysychansk.

"In order to avoid encirclement, our command could order that the troops retreat to new positions. All of Lysychansk is within reach of their fire. It is very dangerous in the city,” Haidai said on Ukrainian national television.

Russia’s recent advances to the country’s east have increasingly compromised Ukraine’s supply lines and put at least some of Ukraine’s eastern forces in danger of envelopment, according to Ukrainian officials. Russian sources reported earlier that Russian-aligned forces took control of the road connecting Sivers'k and Lysychansk, preventing Ukrainian troops in Lysychansk from being resupplied and reinforced.

Britain’s Defense Ministry claimed that the Ukrainian military has withdrawn at least some of its units from the Lysychansk area to prevent them from being pummeled by Russian artillery and possibly surrounded. “Russia’s improved performance in this sector is likely a result of recent unit reinforcement and heavy concentration of fire,” the British Defense Ministry added.

Vitaly Kiselev, a top official with the breakaway pro-Russian Luhansk People’s Republic (LPR), estimated that it will take Russian and Russian-aligned forces up to a week to encircle the city. “Literally, I think three to four more days, a week at the most—and Lysychansk and Severodonetsk will be fully blocked,” Kiselev said. The LPR official reiterated the Russian military’s demand for Ukrainian troops in the Lysychansk-Severodonetsk salient to lay down their arms if they wish to be spared.

With Severodonetsk all but under Russian control, Lysychansk is Ukraine’s last major stronghold in the eastern Luhansk region. The United States and other Western countries have committed to supplying Ukraine with further shipments of heavy weapons, but officials have expressed concerns that these systems will not come quickly enough, and in sufficient quantities, to shift the ongoing battle for Donbass in Ukraine’s favor as Russia presses its advantage in troop numbers and firepower.