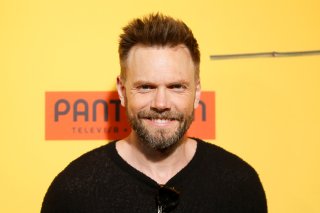 McHale, best known for Community and The Soup, has been appearing in Hisense advertisements since last year, but the new ad is part of a new campaign, which features McHale introducing consumers not familiar with the brand.

“Hisense has the worst marketing budget in the industry. They spend all their money making awesome TVs, not paying advertisers to come up with stupid slogans,” McHale says in one of the ads. He later states that when shoppers choose Hisense, “you wind up with a TV that’s as good, and usually better, than any competitor in their class.”

Another part of the campaign is the “B.S. Report,” a cheeky brand survey released by Hisense. The survey found that 14 percent of consumers regret their television purchases.

“Many consumers ultimately regret their purchases of big-ticket items and wish they’d opted for a less expensive alternative. Nearly 1 in 6 regret their television purchases, wishing they’d gone with a lower-priced option,” the report said.

In addition, more than half of those surveyed agree that “most advertising is nonsense.”

“Most consumers wish brands would spend fewer resources on advertising. In fact, 86% of consumers agree that they’d rather brands spend money and resources on the products they produce rather than advertising,” the release about the findings said. “Furthermore, 82% think there are too many advertisements these days. Nearly 3 in 5 agree that most advertising is ‘nonsense.’”

The survey also found that customers are resistant to advertising jargon.

“More than half of consumers (51%) consider brands that present themselves as ‘purpose-driven’ as solely marketing jargon,” Hisense said. “Additionally, nearly 1 in 4 aren’t at all familiar with the concept of a purpose-driven brand. 2 in 5 consumers can’t name one brand that they consider ‘purpose-driven.’”

And the survey asked about consumer satisfaction, finding that of Hisense (75 percent) close to that of Samsung (80 percent), even as Samsung boasts much higher brand awareness.