‘No Problems’: Putin Plays Down Finland and Sweden’s NATO Bids 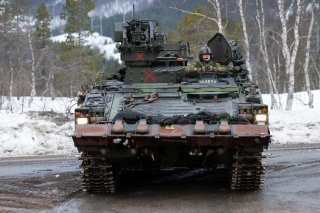 As Finland and Sweden maneuver to join NATO, Moscow offers a firm but muted response.

Finnish president Sauli Niinisto informed Vladimir Putin in a phone call over the weekend that Helsinki will apply to join NATO. "The surprise was that he took [the news] so calmly,” Niinisto told CNN, noting that the Russian president did not repeat any of the threats leveled at Finland by senior Russian officials in recent weeks. Dmitry Medvedev, deputy chairman of the Security Council and former president of Russia, suggested in April that Russia could respond to the NATO accession of Finland and Sweden by stationing nuclear and hypersonic weapons systems in the Baltic region.

A statement published by Russia’s Foreign Ministry on Monday said, "Sweden's entry into NATO will cause significant damage to the security of Northern Europe and the European continent as a whole,” adding that such a development will prompt Russia to “take retaliatory steps, both of a military-technical and other nature, in order to stop the threats to its national security arising in this regard.”

Putin reiterated his long-standing criticisms of NATO expansion during a Monday summit of the Collective Security Treaty Organization (CSTO), a Russian-led military alliance of primarily post-Soviet states. "Aside from this endless expansionist policy, the North Atlantic alliance also goes beyond the framework of its geographical designation, beyond the scope of the Euro-Atlantic region and seeks to get involved in international issues ever more actively and control the international situation from the standpoint of security, and influence them in other regions of the world and by far not in the best way," Putin said.

But the Russian leader played down the Kremlin’s concerns over the NATO aspirations of Finland and Sweden. "As for the expansion of NATO, including through new members of the alliance which are Finland, Sweden—Russia has no problems with these states. Therefore, in this sense, expansion at the expense of these countries does not pose a direct threat to Russia," he said.

"But the expansion of military infrastructure into this territory will certainly cause our response. We will see what it will be based on the threats that will be created for us," Putin warned, according to Russian state news.

Putin has drawn what may become a key point of departure in Russian strategic thinking. Although the Kremlin may not necessarily perceive the expansion of NATO into Finland and Sweden as a threat, the deployment of strategic weapons systems and other military assets from NATO on Finnish and Swedish soil could be seen by Russia as a red line.