Will the Ukraine Crisis Spillover into Northern Europe? 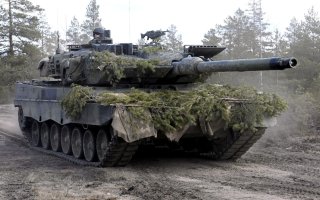 Finland’s leaders announced on Thursday that they will seek to join the North Atlantic Treaty Organization (NATO) “without delay,” marking a drastic reversal of the neutrality policy adopted by Helsinki in the aftermath of World War II.

“NATO membership would strengthen Finland’s security. As a member of NATO, Finland would strengthen the entire defence alliance,” President Sauli Niinisto and Prime Minister Sanna Marin said in a joint statement. “Finland must apply for NATO membership without delay,” the statement added. “We hope that the national steps still needed to make this decision will be taken rapidly within the next few days.” Sweden, which has formally unlinked its NATO membership process from Finland, is reportedly set to follow in the coming weeks.

NATO chief Jens Stoltenberg said earlier in April that Finland and Sweden would be “warmly welcomed” and “quickly” accepted if they applied to join the alliance. NATO officials say the accession process for Finland and Sweden—both countries that already boast a high degree of interoperability with NATO’s military infrastructure—could be done in weeks.

But the expansion of NATO into Finland and Sweden may prove to be more fraught than the alliance’s leadership expects. Turkish president Recep Tayyip Erdogan said Friday that Ankara does not support Helsinki and Stockholm joining NATO. “We are following developments concerning Sweden and Finland, but we are not of a favorable opinion,” Erdogan told reporters, according to the AP. One of NATO’s most militarily and geopolitically significant members, Turkey has taken a neutral stance in the Russo-Ukrainian War to become a key player in peace talks between Moscow and Kyiv.

Croatian president Zoran Milanović said earlier this month that he would block the admission of Finland and Sweden into NATO over an unrelated issue pertaining to Bosnia and Herzegovina’s electoral laws. Though Hungary’s Prime Minister Viktor Orban continues to play his cards close to his chest, he has previously taken a skeptical view of NATO expansion and continues to stand in the way of some punitive EU-NATO measures against Russia.

The Kremlin has predictably denounced Helsinki’s decision, threatening a “retaliatory” response. “Finland’s accession to NATO will cause serious damage to bilateral Russian-Finnish relations,” warned Russia’s foreign ministry in a statement. “Russia will be forced to take retaliatory steps, both of a military-technical and other nature, in order to stop the threats to its national security that arise in this regard,” the statement added.

Russian president Vladimir Putin’s prior comments offer some clues as to what this response might be. “We have made, and executed, a decision to withdraw all of our armed forces 1,500 km from Finland’s borders … notwithstanding tensions in the Baltic region, we have not done anything that would raise Finland’s concerns. And we do this, by the way, in light of Finland’s neutral status. Imagine if Finland were to enter NATO … it would mean that Finnish forces are no longer independent or sovereign in the full sense of the term. They would become part of NATO’s military infrastructure, which in turn would be positioned right up against the borders of the Russian Federation,” said Putin during a 2016 press conference with Finnish President Sauli Niinistö. “Do you think we would act in the same way, keeping our forces 1,500 km away? We would treat any decision made by the Finnish people with respect … we value Finland’s neutral status and view it with respect, but this question is not for us to decide,” he added. Putin’s comments elicited widespread confusion; the distance between St. Petersburg—where Russia’s Western Military District is headquartered—and the Russo-Finnish border is only around 400 km, making it impossible for Russia’s military to withdraw all of its troops 1,500 km away from Finland. Nevertheless, Putin’s 2016 statement reflects one likely outcome of Finland’s NATO accession: the unprecedented buildup of Russian forces along the Finnish border.

Deputy chairman of Russia's Security Council and former Russian president Dmitry Medvedev suggested another possibility: Russia could station nuclear and hypersonic weapons systems in the Baltic region. Lithuania’s defense ministry brushed off Moscow’s threats, telling reporters that nuclear weapons “have always been kept” in Russia’s Central European enclave of Kaliningrad. Be that as it may, the further buildup of nuclear weapons— and the introduction of more sophisticated nuclear or nuclear-capable systems—will exacerbate existing military tensions in the Baltic region.

Deputy Permanent Representative of the Russian Federation to the UN Dmitry Polyanskiy issued the most direct threat to Helsinki and Stockholm so far. “They [Finland and Sweden] know that the moment they become members of NATO, this will trigger certain reciprocal steps from the Russian side. If there are NATO units on these territories, then these territories will become targets—or potential targets—for a strike,” he said. “NATO is an extremely hostile bloc for us; it is an enemy, and NATO itself considers Russia an enemy. This means that Finland and Sweden will suddenly go from neutral countries to being part of the enemy, and they will bear all of the associated risks.”

The United States and UK have been actively supporting the NATO accession of Finland and Sweden. The efforts of major Western powers to facilitate a new wave of NATO expansion reflect their ongoing mission—one that has been articulated and pursued since the invasion of Ukraine commenced on February 24–to weaken Russia militarily and isolate it geopolitically. But how might Moscow, which has continually threatened to use both tactical and strategic nuclear weapons if its existential interests are threatened, react if backed into a corner?

Moscow launched the Russian invasion of Ukraine, in part, out of concern over NATO’s creeping eastward expansion since the end of the Cold War. The alliance may soon be closer than ever to Russia’s doorstep, auguring an escalation of the Russia-West conflict from a proxy war in Ukraine to a broader European confrontation with unpredictable and potentially catastrophic consequences.