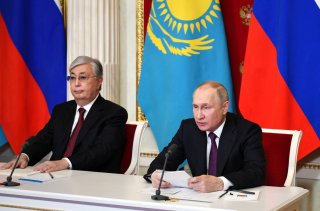 “Today’s visit is of particular importance: this is Kassym-Jomart’s first visit after being re-elected as president of Kazakhstan, and it is of a symbolic significance, for it underscores the special nature of our relations. We highly appreciate that,” Putin said on Monday, according to Russian state news outlet TASS. “We always use our meetings to discuss the current developments. We primarily discuss the economy, because that has been the foundation of our other successes across various fields,” the Russian president said, pointing to close economic ties between the two countries. “We saw an increase in trade in 2021, and that has been growing steadily in 2022, too. We have been working both in our traditional and hi-tech spheres which is vital for the future.”

Tokayev reiterated the importance of the visit and joined Putin in calling for a deepening of the bilateral economic relationship. “This is my first foreign visit after this event [the Kazakh snap election] and that in itself has political significance and, of course, a certain symbolism,” he said. “For Kazakhstan, Russia is and has always been a strategic partner.”

It is unclear if Tokayev’s visit, which comes at a turbulent time for Russia’s Eurasian partners who are trying to navigate the new security climate engendered by the Russo-Ukrainian War, yielded any concrete agreements between Moscow and Astana.

The Kazakh president took steps to distance himself from Moscow following its invasion of Ukraine while continuing to work with Russia in other areas, pursuing what his administration has described as a “multi-vector” policy between Russia, China, and the West. Though Tokayev has maintained close defense and economic ties with Moscow since the war began, Kazakhstan previously sent humanitarian aid to Kyiv and has not recognized Russia’s annexation of four Ukrainian regions.

Last week at a summit of the Collective Security Treaty Organization (CSTO), a Russian-led military alliance composed of six post-Soviet states, Tokayev called for an end to the Ukraine conflict. “Regarding Ukraine, I believe that the time has come for a joint collective search for a peace formula. Any war ends with peace negotiations. Any chance must be seized to achieve at least a truce,” he said, according to Reuters. “We must not allow the fraternal Russian and Ukrainian peoples to part ways for tens or hundreds of years with mutual unhealed grievances.”