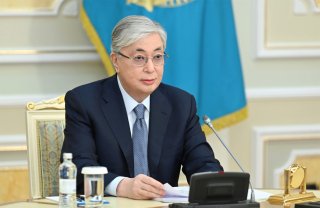 Kazakh president Kassym-Jomart Tokayev, who has charted an independent foreign policy course between Russia, China, and the United States, secured a second term in Sunday’s snap election with 81.31 percent of the vote, according to the country’s electoral commission.

"We can say that the people have expressed convincing confidence in me as president and all of you," said Tokayev, sixty-nine, according to Reuters.

Russian president Vladimir Putin congratulated Tokayev on Monday. "You have received a strong mandate of trust from your fellow citizens, which opens up new opportunities to fulfill the policy of state development that you are promoting,” he said, according to Russian state news outlet TASS. Putin stressed the "strategic partnership and allied relations between our countries, based on the good traditions of friendship, good-neighborliness and mutual respect, are developing in quite a positive way."

Tokayev has continued the “multi-vector” foreign policy of his predecessor, Nursultan Nazarbayev, maintaining Kazakhstan's historically close relationship with Moscow while taking steps to cultivate further economic ties with Europe and China. "I believe that given our geopolitical situation, given the fact that we have over $500 billion involved in our economy, given that there are global companies operating in our market, we simply have to pursue a multi-vector, as they say now, foreign policy," Tokayev told reporters over the weekend.

Astana announced earlier this summer it will not recognize referendums held in four occupied Ukrainian regions to join the Russian Federation. “As for the holding of referendums ... Kazakhstan proceeds from the principles of territorial integrity of states, their sovereign equivalence and peaceful coexistence,” said Foreign Ministry spokesman Aibek Smadiyarov, as quoted by Reuters. "We reconfirm our readiness to provide all possible assistance to the establishment of a political dialogue," Smadiyarov added.

Tokayev said in June that, though his government continues to work with Moscow in an “intensified manner,” Kazakhstan will not violate any of the international sanctions imposed on Russia over its invasion of Ukraine. "We cannot violate them, especially because we receive warnings about possible so-called secondary sanctions against our economy from the West if we did violate the sanctions," he added.

Kazakhstan is one of five member states of the Eurasian Economic Union, which also includes Russia and Belarus, and is a member of the Russian-led Collective Security Treaty Organization (CSTO). The CSTO, a military alliance composed of six post-Soviet countries, deployed some 2,500 troops to Kazakhstan earlier this year as the country was roiled by a wave of massive anti-government protests.