What’s Really Behind the Unrest in Kazakhstan? 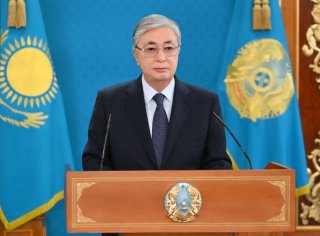 Mass protests erupted earlier this week in the western Kazakh town of Zhanaozen, ostensibly triggered by sharp increases in fuel prices. Kazakh president Kassym-Jomart Tokayev initially responded in a placatory manner, implementing temporary price controls on fuels and other goods, but the protests quickly escalated to a nationwide state of emergency. Government buildings and police stations across Kazakhstan were stormed and set ablaze, the country’s largest airport was briefly taken over, and at least eighteen Kazakh security officers were reportedly killed by what the government is now describing as foreign-trained “terrorist gangs.”

The full extent of the protesters’ aims remains uncertain. Several thousand protesters in Zhanaozen recently presented what the Washington Post described as the “most specific list of demands to date,” including Tokayev’s removal from power, expanded civil rights protections, and a return to a 1993 version of the Kazakh constitution that is believed to be more democratic. But it is unclear if the demands of this specific crowd can be interpreted as an accurate representation of the aims of the protest movement writ large. Kazakh officials and Russian news reports alleged widespread evidence of Islamic fundamentalist sentiment among some of the protesters, with rioters reportedly uttering Islamist slogans whilst attacking government buildings. Kazakh media reporting pointed to the presence of outside agitators who allegedly incited crowds with pan-Turkish and pan-Islamist rhetoric. Allegations of external interference are playing out in the backdrop of what increasingly appears to be a schism unfolding within Kazakh elite society.

Was the upsurge in violence simply a battle between powerful rival clans? Yermukhamet Yertysbayev, who served as an advisor to former Kazakh president Nursultan Nazarbayev, accused swathes of the Kazakh security establishment of “betrayal,” said in an interview with Russian outlet RBC on Friday that the country’s National Security Committee has covered up the existence of militant “training camps in the mountains” for years. Yertysbayev insisted that spontaneous riots of this scale would have been impossible if not for the existence of “traitors in the highest echelons of government.” The former minister maintains that guards stationed at the Almaty International Airport were ordered by unidentified security officials to stand down less than one hour before the premises were overrun by armed rioters. Nazarbayev—who remained a key fixture in Kazakh politics after formally transferring power to his hand-picked successor Tokayev—reportedly left the country with his daughters on Friday. Kazakh authorities have allegedly returned to calling the Kazakh capital, which was renamed to Nur-Sultan in 2019 in Nazarbayev’s honor, by its former name of “Astana.”

Sources in Moscow indicate that Tokayev essentially launched a coup to oust Nazarbayev—and ended up relying on Russia to secure his position. Tokayev invited forces from the Collective Security Treaty Organization (CSTO), a Russian-led post-Soviet military alliance of which Kazakhstan is a member, to restore order. Armenian prime minister Nikol Pashinyan, the current chair of the CSTO’s collective security council, announced on Wednesday night that CSTO forces are entering the country for “a limited period of time with the aim of stabilizing and normalizing the situation.” CSTO troops mobilized within mere hours of Tokayev’s formal request, suggesting that the intervention had been planned well beforehand.

Kazakh officials allegedly collaborated with Chinese-affiliated actors to effectively block all internet access in an effort to stop the protesters from organizing. Beijing, which is a major investor in Kazakhstan’s energy sector, has offered statements of avid support to Tokayev throughout the protests. “China is willing to provide necessary support to Kazakhstan to help Kazakhstan tide over its difficulties. Regardless of the risks and challenges encountered, China is Kazakhstan’s trusted friend and reliable partner,” said Chinese leader Xi Jinping.

Buoyed by outside help, Tokayev ordered Kazakh security forces to “shoot to kill without warning” in a new push to regain domestic control. “What negotiations could there be with criminals and murderers?” he said on Friday. “We had to deal with armed and trained bandits and terrorists, both local and foreign. Therefore, they need to be destroyed, and this will be done in the near future.” The CSTO deployment has spawned a wave of speculation, both in Moscow and among Western observers, as to Astana’s geopolitical future.

The Kremlin has not officially formulated any stipulations—nor is it clear that Tokayev has offered any concrete promises—in exchange for Russian military intervention. Margarita Simonyan, editor-in-chief of the Russian media outlet RT, took to Twitter on Friday to draft a list of concessions that Moscow should demand from Tokayev; these include the recognition of Russian-annexed Crimea, the re-establishment of the Cyrillic alphabet in place of Latin, establishment of Russian as the country’s second official language, the removal of any restrictions on Russian-language schools, and expulsion of “anti-Russian” non-governmental organizations.

It would not be unprecedented or particularly far-fetched for Moscow to negotiate some kind of long-term basing agreement with Astana, not unlike the permanent Russian peacekeeping mission stationed in Azerbaijan following the end of the 2020 Nagorno-Karabakh War. Washington has largely refrained from taking a strong policy stance on the CSTO intervention, with White House press secretary Jen Psaki instead calling on the peacekeeping mission and local law enforcement to abide by international law. “...it’s not clear why they feel the need for any outside assistance, so we’re trying to learn more about it,” said Secretary of State Antony Blinken. “I think one lesson in recent history is that once Russians are in your house, it’s sometimes very difficult to get them to leave.” So far, Russian president Vladimir Putin has played his hand well, using the crisis to fortify Moscow’s sphere of influence in Central Asia.