Nagorno-Karabakh and the Fresh Scars of War 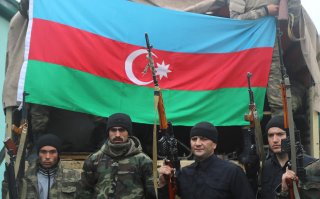 With a little over one month since the signing of the Nov. 10 cease-fire to end what is now called the Second Nagorno-Karabakh War, the two belligerents have retrenched in their postwar domestic messaging. At least on this, there has been a remarkable degree of convergence between the two opposing sides—Yerevan and Baku broadly agree that the latter decisively won, and the former badly lost. Azerbaijan is holding back-to-back celebrations, culminating in a grand victory parade last week: “If Armenia dares to show its fascism towards Azerbaijan once again, it will face our iron fist. A new period is beginning for Azerbaijan,” said Azerbaijan’s President İlham Aliyev during a recent victory ceremony. Armenia, meanwhile, continues to be roiled by an explosive mix of nation-wide mourning and anti-government rage. Opposition parties have launched repeated efforts to remove Pashinyan from power over his government’s alleged mishandling of the Armenian war effort. Earlier this week, protesters tried again to storm a state building in Yerevan with demands for Prime Minister Nikol Pashinyan to resign immediately.

These sentiments are amplified by a broad international consensus stretching from Washington to Moscow. To be sure, there is an undeniable kind of logic to the mainstream reading of the war. Azerbaijan successfully retook wide swathes of territory lost during the First Nagorno-Karabakh War of 1988–1994, including the cultural landmark of Shusha and seven Azerbaijani districts. Armenia, by contrast, was forced to evacuate several occupied territories after over a month of heavy fighting.

However, this simplified rendition only tells part of the story. A closer look at the circumstances behind Azerbaijan’s offensive suggests that Baku’s victory may prove more costly in the long-run than Yerevan’s defeat.

There is a mounting body of evidence that the Azberbaijani war effort was planned, coordinated, and in large part executed by Turkey. Military aid from Ankara included, but was not limited to, Turkish Bayraktar TB2 drones, special forces commandos, and Turkish-affiliated Syrian mercenaries. Turkish control over Azerbaijan’s armed forces is so deeply embedded that there are reports of Azerbaijani military officers being fired at Ankara’s behest after criticizing the extent of Turkish involvement in the Nagorno-Karabakh conflict. Turkish president Recep Tayyip Erdoğan’s recent participation at a victory parade in Baku evoked a striking portrait: the two leaders stood side by side, behind them a row of Turkish and Azerbaijani flags arrayed in equal numbers. Indeed, Turkish flags were just as ubiquitous on the streets of Baku as their Azerbaijani counterparts.

To the extent that Aliev won, his victory came at the price of Azerbaijan’s sovereignty. In what is increasingly taking the form of a suzerainty arrangement, there will be a continued Turkish military presence in Azerbaijan. Turkey’s emerging veto power over Azerbaijani foreign and military policy is only likely to solidify under the auspices of Ankara’s pan-Turanic vision for expansion in the South Caucasus. Erdoğan’s gains are abundantly clear, but what exactly did Aliev win? Following forty-five days of heavy fighting and thousands of Azerbaijani casualties, large swathes of the occupied territories remained under Armenian control. It was only after the Russian intervention on Nov. 9 that Armenia was forced to evacuate the remaining Azerbaijani districts as part of the cease-fire agreement. Even so, the ethnically Armenian enclave of Nagorno-Karabakh is now under the indefinite occupation of Russian peacekeepers. This point bears repeating: as a direct result of the war, Aliev no longer has a clear pathway for returning Nagorno-Karabakh under Azerbaijan’s control. Not only has Baku failed to fully restore Azerbaijan’s territorial integrity, but it is now faced with a two-pronged foreign military occupation with no end in sight.

Consider this same set of facts from Yerevan’s vantage point. Armenian leadership agreed in principle that Nagorno-Karabakh is the legally recognized territory of Azerbaijan, but has long refused to take any meaningful steps to cede the enclave or any of the seven territories captured by Armenian forces during the First Nagorno-Karabakh War. Whether by intent or through inertia, the sum total of Armenian policy toward Nagorno-Karabakh was to keep it a frozen conflict. That, in essence, is precisely what the cease-fire agreement has achieved. Barring any drastic geopolitical shifts in the South Caucasus, Nagorno-Karabakh will remain an autonomous Armenian enclave within Azerbaijan’s de jure borders. The negotiated presence of Russian peacekeepers, far from a defeat for Armenia, will grant the people of Nagorno-Karabakh a kind of security that could have never been achieved by Armenian force of arms alone.

Yerevan bemoans its loss of the seven captured regions, but here, too, we must look at recent history. As aptly noted by the prominent Russian political scientist Andranik Migranyan, there was both a tacit and formal recognition among Armenia’s political class that they cannot hold on to the captured districts surrounding Nagorno-Karabakh forever. The goal has long been to trade these territories, sometimes called the “security belt,” in exchange for a robust autonomous status for Nagorno-Karabakh on the best possible terms. With the Russian peacekeeping mission already guaranteeing the internal autonomy of Nagorno-Karabakh, there is no longer anything to bargain for. Thus, these seven territories are more of a liability than an asset; their possession by Armenia offers no strategic value but is merely a chronic source of Azerbaijani revanchism.

With the cease-fire, Armenia has finally disentangled itself—albeit violently and haphazardly—from a prolonged territorial conflict that it could never win. The fresh scars of war will fade in time and Yerevan, whether under Pashinyan or any other administration, can hopefully rededicate itself to the many domestic needs of the roughly three million people living within Armenia’s current borders. Baku, on the other hand, is poised to pay a steep price for “victory” as it navigates existential questions of statehood and sovereignty in the coming years.