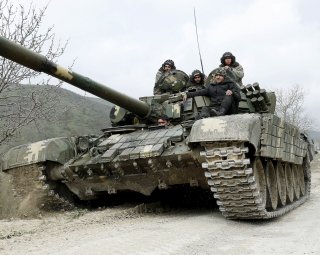 U.S. policymakers are warning Armenia and Azerbaijan to stand down after fourteen people died in a deadly border clash between the two post-Soviet republics.

Armenia and Azerbaijan have been at odds over the territory of Nagorno-Karabakh since both countries obtained independence from the Soviet Union in the early 1990s. The two sides agreed to a ceasefire in 1994 but have been unable to come to a permanent peace agreement in international talks.

This week’s events have threatened to unravel the peace process, as the deadliest clashes in years erupted along the tense border. The fighting began on Sunday and has killed at least sixteen people as of Tuesday afternoon, including an Azerbaijani major-general.

“The United States condemns in the strongest terms the violence along the Armenia-Azerbaijan international border,” State Department spokeswoman Morgan Ortagus wrote in a Monday statement. “We urge the sides to stop using force immediately, use the existing direct communication links between them to avoid further escalation, and strictly adhere to the ceasefire.”

The United States, France, and Russia are co-chairs of the Organisation for Security and Co-operation in Europe Minsk Group, which is a coalition of countries overseeing the Armenian-Azeri peace process.

“I stand with Armenia as they protect their territorial integrity,” he wrote in a Monday statement posted to social media. “Azerbaijan and Turkey must respect the Armenian/Azeri border, respect the aspirations of the Armenian people of Nagorno Karabakh, and should deescalate this conflict immediately.”

The United States recognizes Nagorno-Karabakh as Azerbaijani soil, but the disputed territory is controlled by an Armenian-backed government called the Artsakh Republic.

The territory has an ethnic Armenian majority but was part of Soviet Azerbaijan from 1921 to 1991. It attempted to break away from Azerbaijani rule amidst ethnic violence during the breakup of the Soviet Union, leading to war between the newly-independent republics of Armenia and Azerbaijan.

Both sides have pointed the finger at each other for this week’s fighting. It took place days after Azerbaijani President Ilham Aliyev accused Armenia of dragging its feet in “meaningless” peace negotiations.

The Azerbaijani foreign ministry accused Armenian forces of attempting to seize territory in the Tovuz region in a Sunday statement.

“Armenia bears full responsibility for such provocative actions that serve to aggravate the situation,” the ministry declared.

“We strongly condemn provocative actions of Azerbaijani armed forces & with their resumption, political-military leadership of Azerbaijan will bear all the responsibility for the unpredictable consequences of undermining regional stability,” wrote Armenian Prime Minister Nikol Pashinyan on Monday.