‘You Caused This’: Finnish President Blames Putin for NATO Application 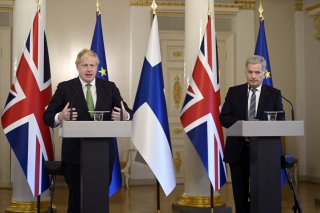 Finnish president Sauli Niinisto argued on Wednesday that Russian leader Vladimir Putin was responsible for Finland’s shift away from neutrality and toward the West—a shift that led Helsinki to sign a defense treaty with the United Kingdom and decide to apply to NATO.

Speaking in Helsinki during a visit from British prime minister Boris Johnson, Niinisto argued that Finland’s decision to enter into security arrangements had been brought about by Russia’s actions. He underlined that Finland’s neutrality during the Cold War, during which both Finland and neighboring Sweden refused to align with either NATO or the Soviet Union, had been a matter of their sovereign choices, and they alone could control their foreign policy.

By demanding that Sweden and Finland remain outside NATO, as the Kremlin did in the run-up to the invasion of Ukraine on February 24, Niinisto argued that Russia had forced the two countries to abandon their neutrality in order to prove that they still had their “own will.” He also cited the Russian invasion of Ukraine, which nearly all Swedes and Finns oppose, as a motivating factor.

“They [Russia] are ready to attack their neighboring country,” Niinisto said. “So … my response would be that you caused this. Look at the mirror.”

Johnson’s visit to Helsinki came as part of a foreign trip commemorating the mutual security pacts the United Kingdom inked with both Sweden and Finland. Under the terms of the agreements, Britain would be required to come to either country’s defense if they came under attack.

This pact will ultimately be superseded by NATO, which guarantees mutual defense through its Article V, after Helsinki’s accession process is complete.

While Finland has still not officially submitted a membership request, both Niinisto and Prime Minister Sanna Marin have announced their support for the measure. Recent polls have shown that a supermajority of Finns now support NATO accession—a sea change for the traditionally neutral country, where accession was polling at 20 to 30 percent prior to the invasion of Ukraine.

The Swedish parliament has announced that it will make its decision on NATO membership public on May 15. It is widely predicted to join the military alliance as well, as most Swedish parties are in favor of the move.