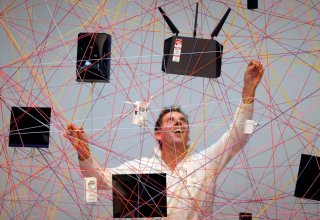 Netgear announced this week that it has posted revenue of $367.1 million in the fourth quarter of 2020, a 45.1 percent increase over the same period in 2019. The company also posted a fourth-quarter operating income of $33.8 million, compared with a loss of $0.2 million the year before.

The results were ahead of analyst estimates for Netgear, Yahoo Finance reported.

The strength came as the pandemic and its associated stay-at-home orders suddenly made reliable home networking much more important than it had been previously.

“Netgear ended 2020 with another outstanding quarter, delivering 45% revenue growth and 11% non-GAAP operating margin. In a year without parallel, the Netgear team rallied against countless obstacles to continually surpass our expectations while remaining efficient to produce strong operating leverage on our growth,” the company’s CEO, Patrick Lo, said in the earnings release.

Another difference between 2019 and 2020 was the arrival of WiFi 6 systems, with the company’s first Wi-Fi 6E routers, the Nighthawk RAXE500 Tri-band WiFi Router, arrived in January at the virtual International CES, where it was recognized as a 2021 Innovations Award Honoree. The product is set to hit the market this spring at a retail price of $599.99, where it will compete with similar products by TP-Link, Linksys, and others.

The company also released its Nighthawk Pro Gaming XR1000 router in September, just before the start of the fourth quarter.

The company also issued a forecast that its net revenue in the first quarter is likely to land in the  $300 million to $315 million range.

“At the heart of the strong demand for our products are families working and learning from home — these families need to solve for high speed, high-capacity bandwidth that stretches to every corner of the home. This is fueling rapid growth of a new premium segment that is defined by a WiFi 6 mesh system with tri-band architecture,” Lo added.

“At the forefront of this technology, NETGEAR has a commanding share in this segment. We continued our pace of adding new subscribers, which were up by 68,000 in Q4 to 437,000 paid subscribers, and far surpassed our goal for the year. As a long-tenured market leader, NETGEAR will continue to innovate to deliver the leading products and services that customers increasingly demand.”

Stephen Silver, a technology writer for the National Interest, is a journalist, essayist, and film critic, who is also a contributor to Philly Voice, Philadelphia Weekly, the Jewish Telegraphic Agency, Living Life Fearless, Backstage magazine, Broad Street Review, and Splice Today. The co-founder of the Philadelphia Film Critics Circle, Stephen lives in suburban Philadelphia with his wife and two sons. Follow him on Twitter at @StephenSilver.