“Everything Had To Be Invented”: Creating the SR-71 Blackbird 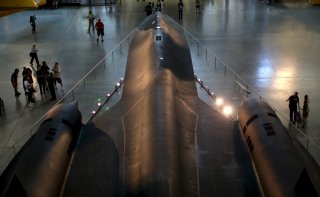 By the early 1960s, Lockheed’s “Skunk Works” experimental aircraft division had become recognized as one of the preeminent design firms of the twentieth century. The team there, led by Clarence “Kelly” Johnson, had already created the Bell P-80 Shooting Star and the Lockheed U-2, which had seen extensive use as a top-secret reconnaissance aircraft throughout the 1950s.

However, with the shootdown of U-2 pilot Francis Gary Powers over the Soviet Union, the designers’ primary objective changed from altitude, which the U-2 had mastered, to speed, which it had not; the aircraft could easily be outpaced by Soviet MiG fighters, and, as in the case of Powers, by missiles. To reduce this danger, Johnson committed Skunk Works to building a new aircraft that could comfortably reach speeds exceeding two thousand miles per hour, a speed approaching Mach 3.0. And he committed the team to building the aircraft in twenty months.

As Johnson later recalled, the aircraft that took shape on the drawing board was nothing like any plane that had come before it: “Everything had to be invented. Everything.”

At such a high speed, friction from the air would simply melt the airframe of an aluminum aircraft, the usual building material for planes. A steel plane could hold up to the temperature, but its weight would not allow the plane to fly at the needed speed. Eventually, Johnson and his team settled on titanium, which was both light and strong enough for the plane’s needs. Ironically, because the United States could not produce enough titanium domestically for the plane’s needs, it clandestinely exported it from the Soviet Union, with Moscow none the wiser as to its true purpose.

The solution to another significant challenge directly led to the plane’s name. A problem that arose during design came from heating; the heights the plane would operate at, and the extreme temperatures along the leading edge, led some parts of the plane to be burning hot and others freezing at the same time. The simple answer to this dilemma was black paint, which would more evenly distribute the heat across its surface. The aircraft was covered in the stuff, and the “Blackbird” was history.