$10 Billion in the Hole: Venezuela Owes Russia Tons of Money for Weapons 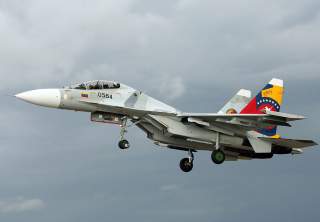 Key point: Moscow has extended credit and gained leverage, but it may never see its money back.

On the morning of July 19, a U.S. Navy turboprop-engine spy plane was trolling over the Caribbean waters just north of Venezuela when it attracted unwelcome attention.

Derived from an old airliner, the EP-3E Aries II was designed to cruise over international airspace while its crew of over twenty personnel snooped on the communication signals and electromagnetic signatures of potential adversaries.

Abruptly at half-past eleven, a Russian-built Su-30MK2 “Flanker” twin-engine multi-role fighter swooped down upon the ponderous surveillance plane, blaring warnings that it had failed to report its flight plan with the Maquieta Flight Information Region.

You can see clips recorded by the U.S. crews of the intercept here. U.S. Southern Command groused the interceptor had “aggressively shadowed” the EP-3.

Venezuela released its own video of the intercept. According to an accompanying media report, the EP-3 was detected on radar at 9:52 AM and the interceptor dispatched at 10:33. However, the EP-3’s flight path as visualized in the Venezuelan media report doesn’t appear to show an airspace violation.

The Su-30 is a fast, maneuverable and heavy-lifting attack jet comparable to the America F-15E Strike Eagle—and arguably the most capable fighter currently in service in South America. The MK2 model features improved sensors to enhance its anti-ship capabilities.

Caracas imported twenty-four Su-30MK2s between 2006 and 2012 at a cost of $2.2 billion. After one of the Su-30s crashed in 2015, Caracas ordered another twelve for $480 million dollars. But don’t count on seeing those additional Flankers arrive any time soon.

Between 2006 and 2014, the governments of Hugo Chavez and Nicolás Maduro purchased billions of dollars of arms from Moscow. But even when Venezuela’s oil-exporting economy was doing relatively well, Caracas could only afford the purchases by taking out three loans between 2009-2014 totaling $10 billion—also extended by Moscow.

This arrangement has left both parties in a hole: since oil prices tanked in 2014 Venezuela simply hasn’t been able to make its payments.

Prior to assuming a strongly anti-Washington stance under Hugo Chavez, Caracas primarily purchased arms from Europe and the United States, including hundreds of French tanks and American F-16A and B Fighting Falcon jets. (Twenty F-16s still officially serve on in Venezuela’s aviation despite being cut off from spare parts.) Fearing U.S. intervention, the Bolivarian nationalists turned to Russia, China and Cuba to serve as commercial, political and military allies.

The Venezuelan National Army, for example, purchased 192 T-72B1V main battle tanks in two batches in 2009 and 2012, as well as 130 BMP-3M infantry fighting vehicles bristling with anti-tank missiles and both 100- and 30-millimeter cannons. Though not peers to modern Western main battle tanks, Venezuela’s T-72s outgun and outnumber the armor possessed by most other armies in South America. Neighboring Colombia, for example, has no tanks at all.

For air defense, the Army and Marines also operate two long-range S-300VM surface-to-air missile batteries which can threaten aircraft up to 124 miles away, and smaller S-125 Pechora, Buk and Tor systems for medium- and short-range air defense, backed up by over three-hundred 23-millimeter flak guns.

China comes a distant second in arms imports, having already delivered a dozen Y-8 cargo planes (comparable to the C-130), twenty-four K-8 combat-capable jet trainers and dozens of amphibious APCs and tanks for the Venezuelan Marine Corps. There are also hypothetical deals for Z-9 anti-submarine helicopters and L-15 trainer/light-attack jets that have been put on hold due to an inability to pay.

Ironically, while Venezuela can muster far more firepower than its neighbors in the region, its conventional forces still would pose only a minor obstacle for its chief perceived threat—the U.S. military.

When Your Arms Dealer is Also Your Bank Lender

Venezuela’s economic death spiral has left it unable to pay for maintenance and training with these expensive military systems. Despite restructuring the loans into a ten-year repayment plan by 2017, it has been defaulting on those payments too.

The Wall Street Journal reported that at its peak, Russia’s state-owned Rostec and Rosoboronexport companies had deployed as many as one or two thousand technicians to help maintain the imported weapons and train Venezuelan personnel on how to operate them. But since the payments from Caracas have dried up, all but a few dozen of the contractors were withdrawn by June 2019.

Moscow’s investment in Caracas goes far beyond the commercial, however: Venezuela serves as an important symbolic outpost of Russian influence in Latin America, enhancing Russia’s perceived prestige and diplomatic clout. It also occasionally serves as a host for nuclear-capable bombers, more to raise Washington’s hackles than for practical military purposes. Should Maduro’s rule be overthrown, Moscow would lose a useful ally and face uncertainty on whether the money it loaned would be repaid by a Western-backed government.

In March 2019, over one hundred Russian active-duty military personnel landed in Caracas to help maintain Venezuelan hardware before returning in June. Earlier, up to four hundred Russian private mercenaries flew from Syria to Venezuela to serve as an elite bodyguard after Washington and South American governments supported an attempt by National Assembly chief Juan Guaido to oust Maduro.

Despite Venezuela’s long-running economic disaster and intensifying pressure from the U.S. and South American governments, Venezuela’s armed forces have remained loyal to Maduro, who has prioritized military spending over housing, food and education according to SIPRI. For example, in addition to the regular military budget, an annual average of 25 percent of the FONDEN oil-revenue-funded economic development budget is devoted to military projects, totaling $7.9 billion over ten years. High-ranking officers are also given preferential access to food which can be resold on the black market at immense profit margins.

Thus, while Venezuela’s armaments may leave it indebted to Russia and would do little to stop a U.S. invasion, they may help the government deter potential regional adversaries and internal revolt.

However, Moscow is having to reckon with the reality that in regards to Venezuela, political and profit motives may no longer dovetail so neatly. Currently, it seems the Kremlin is willing to incur a financial hit to prop up a loyal overseas client, but Russian manufacturers themselves—not so much.

Sébastien Roblin holds a master’s degree in conflict resolution from Georgetown University and served as a university instructor for the Peace Corps in China. He has also worked in education, editing, and refugee resettlement in France and the United States. He currently writes on security and military history for War Is Boring. This first appeared in July 2019.