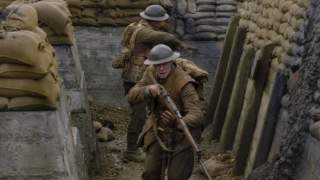 Yes, it’s up for this year’s “Best Picture” Oscar, but that hasn’t stopped critics delivered decidedly mixed reviews to 1917. The plot is the stuff of a standard action/adventure flick: two soldiers on a desperate mission to stop a British unit from charging into a trap. At a more substantive level, however, it’s a movie about the humanity and inhumanity of war. On that front, it’s the best since Saving Private Ryan (1998) and definitely worth seeing.

Like Steven Spielberg’s tale of a squad of soldiers trampling around the Normandy countryside after D-Day, this Sam Mendes storyline is equally implausible. As a set piece of military history, it is to be scrupulously ignored.

Yet, there are reasons engage with 1917 as a serious war film. For one, the movie gets the details exquisitely right. Here Saving Private Ryan set a high bar. It would be difficult to have a more realistic appreciation for what it was like to land on  “Bloody” Omaha Beach during the Normandy invasion without a time machine. More recently, Chris Nolan’s Dunkirk (2017) hit that mark, as well. These movies have avoided the kind of groaning missteps that detract from otherwise excellent movies like Patton (1970) which paraded around “German” armor that were clearly just American tanks painted up with Wehrmacht symbols.

While you can’t smell the retching horror of filth, decay and cordite in the trenches, 1917 dwells on every visual cue from grinning corpses to the fat rats gorging on the detritus of war. To understand just how accurate the look of the movie is, compare 1917 to Peter Jackson’s incredible documentary They Shall Not Grow Old, (2018), which relies exclusively on recovered archival footage from the First World War.

The other point on which the film excels is portraying the human dimension of war. At the height of the European enlightenment when philosophers were talking about the perfection of human enterprises from economics to governance, Carl von Clausewitz, the great Prussian military theorist said, “Not so fast.”

Clausewitz was himself a veteran of several campaigns—on both the winning and losing sides. One of the essential insights of his monumental treatise, “On War,” was that conflict was anything but a mechanistic, linear, predictable act. Soldiers, at their own peril ignored, the foibles, misjudgments and shortfalls of men in battle and the importance of terrain, the unpredictability of weather and the many other forces and factors that can determine the outcome of combat. He called it the “fog of war” and the “friction of battle.” In this film, Clausewitz would have lamented setbacks to the Prussian military, but he would have well appreciated the trials, tests and uncertainties that confront the soldiers on the way to the front.

Mostly, the film reminds viewers that it is never a good idea to think of war in antiseptic or abstract terms. Whether it’s the decision to go over the top or take out Soleimani, we must never forget that war is a competition between living, breathing, cunning, determined foes and that the price of failure and, often times, success is always measured in blood and tragedy.

A 25-year veteran of the U.S. Army, James Jay Carafano is a Heritage Foundation vice president.  He directs the think tank’s research