In 1991, a U.S. Sailor Was Sucked Into a Jet Engine—And Survived 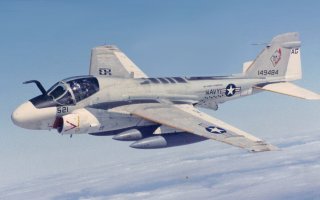 In 1991, the United States prepared to dislodge Iraqi dictator Saddam Hussein from Kuwait, the oil-rich Arabian emirate he had invaded the previous summer.

As part of this effort, the U.S. Navy was dispatched to the Persian Gulf and tasked with launching bombing raids into Kuwait and Iraq. Many of the planes taking part in these raids were A-6E Intruders launched from aircraft carriers in the Gulf.

The A-6E Intruder is a twin-engine attack aircraft built by the Grumman Aerospace Corporation. Intended to take the place of the Korean War-era A-1 Skyraider, the plane saw service between 1963 and 1997; in turn, it had its functions phased out by the F/A-18 Hornet and the F-14 Tomcat. However, even after the Intruder’s retirement, a derivative designed for electronic warfare, the EA-6B Prowler, remained in service until 2019.

The Intruder was used extensively during the Vietnam War and saw combat during the U.S. intervention in Lebanon in 1983. By the time of the 1990–1991 Gulf War, the planes were nearing the end of their operational life, but they nonetheless flew more than 4,700 missions from a handful of U.S. aircraft carriers. One of these carriers was the USS Theodore Roosevelt, where the accident took place.

Serving on the Theodore Roosevelt was a twenty-one-year-old Navy serviceman named John Bridget. On February 20, 1991, at 3:41 a.m., a Navy crew was preparing an A-6E for takeoff. As a trainee checked the position of the launching mechanism and backed away from the plane, Bridget walked forward—and was violently pulled into the air and sucked into the A-6E’s enormous turbine.

The clip does not include what happened next; the sailor, still alive, was slowly extracted from the turbine.

“When he was sucked in, his arm extended above his head which caused his body to wedge between the bullet and inside wall of the intake,” Navy reservist Daniel P. Streckfuss said. “Lucky for him, his cranial and float coat were sucked in first causing the [foreign object to damage the] engine, which prompted the pilot to cut the throttle.”

According to Streckfuss, the design of the A-6 engine allowed Bridget to survive; its small intake wedged him in place, keeping the engine from devouring him. The plane’s tremendous power also sucked his goggles and helmet off, sending them into the engine and triggering a foreign object damage shutdown. It took another three minutes for other sailors to extract him.

Despite the small size of the intake, and the engine’s safeguards, there is no question that Bridget was astonishingly lucky to be alive. Not everyone in his position is. On New Year’s Day 2006, a mechanic at the El Paso International Airport died after being sucked into the engine of a Boeing 737.

Trevor Filseth is a writer for the National Interest.