In 2020, the Chinese Navy Could Launch A Stealth 'Arsenal' Ship. And the Navy Should be Worried. 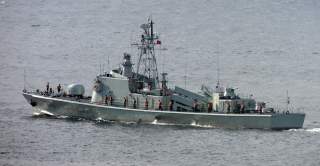