2020 Match-up: Donald Trump vs. Bernie Sanders (Could It Happen?) 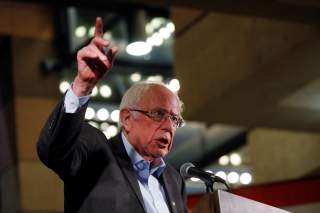 There are two paths for the Democrats to win back the White House (assuming, as presently seems reasonable, that President Donald Trump is acquitted by the Senate and remains a candidate for reelection). One is to win back the voters in Pennsylvania, Michigan, and Wisconsin who cast their ballots for Barack Obama in 2008 or 2012 and then for Trump in 2016. The other is to turn out Democratic voters in those states who did not vote at all in 2016, or who cast their lot with lefty third-party candidates like the Green Party’s Jill Stein.

Former Vice President Joe Biden seems like a good bet for the former—he might be able to put a dent in Trump’s support among working-class whites on the basis of personality alone, and he is slightly more cautious on public policy than the other top-tier Democrats. Sen. Elizabeth Warren might be able to follow the latter path as progressives are energized by her campaign, though there are plausible concerns about her ability to mobilize millennials and (especially) minorities.

A lot would have to fall into place for such an audacious gamble to work, but Sen. Bernie Sanders might actually be able to do both. The socialist from Vermont has surprising populist overlap with Trump on trade and foreign policy, and can point to discrepancies between the president’s record and rhetoric on both. Sanders was never a restrictionist, but he has had to practically be dragged kicking and screaming toward the Democrats’ loosie-goosiness on immigration. He could also potentially drive up Democratic turnout and win back Stein voters.

Sanders as the nominee is no longer looking so farfetched. He is surging in the polls. CNN has him narrowly overtaking Biden for first place nationally; their survey with the Des Moines Register earlier this month had him in the same position in Iowa. Sanders leads in the RealClearPolitics polling average for New Hampshire, including a WBUR poll that has him up by 12 points over the rest of the field. Former South Bend, Ind. Mayor Pete Buttigieg, former New York City Michael Bloomberg and (in Iowa, at least) Minnesota Sen. Amy Klobuchar are finally giving Biden some competition for the center.

As was the case against Hillary Clinton in 2016, Sanders is particularly strong with younger voters. But he has made major strides with black and Latino voters this time around, with a Washington Post/Ipsos poll finding Bernie the top choice of African-American Democrats under the age of 35. It was his failure to diversify his coalition that doomed him four years ago. Back when Warren was riding high in the polls, a majority of The Squad—a quartet of progressive congresswomen of color headlined by Alexandria Ocasio-Cortez‚ endorsed Sanders, arguing he was better suited to build a multiracial progressive workers’ movement.

None of this guarantees Sanders would be able to replicate this success turning out these voters in a general election, though he does appear to recognize the challenge. “To defeat Donald Trump, the simple truth is we are going to need to have the largest voter turnout in the history of American politics — that’s a fact,” Sanders said at a rally in New Hampshire. “That means we are going to have to bring people into the political process who very often have not been involved in the political process.”

That’s the not entirely unrealistic optimistic case for Sanders—he could win the Democratic nomination and, radicalism aside, beat Trump. He might be a stronger general election candidate than some of the more centrist Democrats running. But the optimist’s scenario isn’t the only realistic one and there’s little doubt he’d be a risky candidate.

Sanders is a socialist. Trump can justifiably argue he will take away many Americans’ private health insurance. He has proposed massive new spending that can’t be paid for simply by tinkering with the top marginal income tax rate. He is nearing 80 and had a heart attack during this election cycle. He is not animated by social issues, but he is reliably liberal on them. He has backed away from his (fairly minor) deviationism on guns and immigration, possibly to his detriment in the Rust Belt. He could face a rebellion from Wall Street, financing his opponent or a third party. He could even be rejected, or at least undermined, by the last two Democratic nominees for president.

Even with all his problems, Biden remains the safer candidate. That’s why, even with Sanders’ recent gains, he remains the likeliest nominee. The trouble is that from John Kerry to Hillary Clinton, the safe candidate sometimes still loses too.