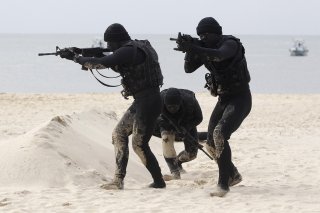 Here's What You Need To Remember: That could have had a major impact on the Falkland conflict—potentially intensifying the forcefulness of the British campaign in retribution, or fostering doubts about the campaign’s costs. Fortunately for everyone involved, Operation Algeciras is a war story where nobody had to die in the end.

On May 4, 1982, Manuel Rojas, the owner of a car rental in Algeciras, Spain was growing suspicious about one of his customers. The same client had renewed the rental on a car several weeks in a row—even though the keys he was carrying revealed he was simultaneously renting cars from several other businesses. And he was paying for everything using lots of U.S. dollars.

It seemed like the kind of thing a gangster might do—and indeed South American gangsters had recently robbed a local bank. So Rojas contacted the police, who told him to delay the client until they could arrive.

The police swooped down and arrested the man and a companion, and then went back to a local hotel and apprehended two more compatriots. They then searched their cars and hotel rooms and discovered they had concealed two powerful naval limpet mines.

Under interrogation, a man named Nicoletti spilled the beans—they were part of a secret operation to strike a blow for Argentina, then at war with the United Kingdom over the status of the Falkland Islands. In a few hours, they had been planning to embark on an underwater mission to blow up a Royal Navy frigate at port in Gibraltar, across the strait from Algeciras.

Operation Algeciras was conceived by Admiral Jorge Anaya, Commander-in-Chief of the Argentinian Navy and one of the leaders of the repressive military junta then ruling the South American state.

Argentina had not expected a military response from the U.K. when it seized the Falkland Islands from the U.K., but in the subsequent weeks it became increasingly evident one was going to happen.

The British could muster more technology and firepower than the Argentines, but the Argentinians counted on one tremendous advantage: the Falklands are only a little over 300 miles away from the Argentinian soil, but over 7,650 miles away from the U.K. That meant that only a limited subset of British military power could stretch over that huge distance, such as submarines, container ships converted into aircraft carriers, and Vulcan strategic bombers.

Anaya figured that he could divert from forces deployed to the Falklands by staging attacks in Europe. But he also wanted legal deniability for the operation, so he didn’t inform other members of the junta and instead assigned an elite team of Navy-adjacent personnel to do the job “off the books.” The sabotage could then be excused as the act of patriots acting outside the authority of the Argentine military.

If that sounds like the plot of an action movie, wait until you hear who was meant to execute the mission: a Peronist leftist terrorist/freedom fighter (take your pick) named Máximo Nicoletti who had already blown up three Argentine ships and attempted to assassinate Anaya’s predecessor!

Nicoletti was the son of an Italian World War II frogman—a branch of the Italian Navy that had inflicted tremendous damage sabotaging Allied capital ships in port during the conflict.

He continued his father’s tradition on behalf of the Peronist Montoneros resistance group. On November 1 1974, he planted explosive on the yacht of a general commissioner of the Argentine federal police, killing him and his wife.

The following year he detonated a 175-pound charge on the riverbed underneath ARA Santísima Trinidad, a Type 45 destroyer of British design being license built in Argentina. The blast delayed construction of the expensive vessel for a year. (Ironically, the Santisima nearly confronted her British sisterships in battle during the Falkland War. In 2013, the unlucky destroyer sank a second time at port while serving as a museum ship, and had to be resurrected yet again.)

A third attack narrowly missed killing the Navy’s then Commander-in-Chief on his yacht.

Nicoletti’s was eventually apprehended by agents of the notoriously brutal Navy Mechanic’s School. However, recognizing an individual with useful talents they recruited Nicoletti rather than torturing and tossing him out of an airplane over the Atlantic as was then customary for “disappearing” the military dictatorship’s foes. He was meant to assist Operation Soberania, a planned invasion of Chilean islands that was aborted at the last minute.

The ex-guerilla was tapped for the mission despite having moved to Miami, Florida, and he was joined by two of his former comrades. His handler on the mission, however, would be a retired Navy officer and spy named Héctor Rosales.

The team flew from Buenos Aires to Paris, and from there to Spain, using forged passports and carrying military diving gear and plenty of U.S. dollars in liquid cash in their luggage.

Anaya separately shipped two 75-kilogram (165 pounds) explosives in a diplomatic pouch to the Argentinian embassy in Madrid which the commandoes picked up without incident. But next they needed to ferry the explosives to the staging point in Algeciras.

This was easier said than done because the FIFA World Cup was to take place that July, and police were on alert for possible terrorism by Basque separatists of the ETA. The Argentinian saboteurs in three vehicles had to communicate visually on the road as they evaded the checkpoints using backroads—sometimes only dodging the police at the last minute.

The team finally assembled in Algeciras and procured a boat from which the divers could deploy for a raid. They then began spying on shipping entering Gibraltar, waiting for a ripe target—and authorization from Anaya. It seemed clear the British had few security measures protecting the harbor.

A Royal Navy minesweeper that entered harbor was deemed too unspectacular to be worthy of attack. Then they proposed sabotaging a huge, neutral oil tanker to bottle up the strait entirely—but Anaya vetoed the idea. Whether out of principle or fearing the diplomatic repercussions, he felt triggering a massive environmental catastrophe at the gateway to the Mediterranean was not a good idea.

Then on May 2, the 3,584-ton Leander-class frigate Ariadne entered the harbor. This seemed an appropriate target, but the U.S. was then undertaking last-ditch negotiations between Buenos Aires and London. Anaya again withheld authorization, not wanting to blow up the peace talks along with the ship.

But that same day the British nuclear-powered attack submarine Conqueror sank the Argentine light cruiser General Belgrano, resulting in the death of 323 crew.

On May 3 Anaya gave the green light for an attack. The Argentine frogmen prepared to depart swim away from their boat on the evening of May 4, plant the explosives under Ariadne’s keel at midnight, and return to Algeciras in the morning and

It might well have gone off like clockwork were it not for the suspicious Mr. Rojas. Or maybe not—years later, Rupert Allasson (pen name Nige Weest) claimed that British intelligence had wire-tapped the communications between Anaya and the commando team, and their intervention had galvanized the local police force.

Obviously that explanation differs substantially from the account centered around the tip off from Rojas, so likely one party or the other may be misrepresenting what occurred to conceal methods or save face.

In any event, the Argentine sabotage squad posed an awkward problem for the Spanish government, which had just joined NATO and become formally allied to the UK, but which didn’t want to alienate Argentina or create a stir before the World Cup.

The decision was made to secretly ferry the saboteurs out of the country without making a fuss. The local police even allowed Nicoletti to personally disarm the explosives and pick up his dry cleaning, who treat them to lunch in return! Then they flew them back to Buenos Aires via the Canary Islands.

The bizarre episode was later chronicled in the documentary Algeciras in 2004, which included the enthusiastic participation of Nicoletti.

Had the plot not been foiled by British intelligence—or a zealous car rental proprietor—it may well have succeeded in heavily damaging a British warship with likely loss of life amongst its 223-person crew.

That could have had a major impact on the Falkland conflict—potentially intensifying the forcefulness of the British campaign in retribution, or fostering doubts about the campaign’s costs. Fortunately for everyone involved, Operation Algeciras is a war story where nobody had to die in the end.

Sébastien Roblin holds a Master’s Degree in Conflict Resolution from Georgetown University and served as a university instructor for the Peace Corps in China. This article first appeared in March 2020 and is being republished due to reader interest.