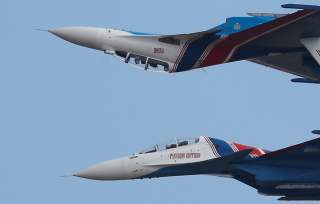 The Russian Army is back. Like a bear awakening from hibernation, the Russian Ground Forces are shrugging off decades of neglect with a rearmament program designed to make it once again the most powerful army in Eurasia.

Russia’s ten-year armament program, scheduled to run through 2020 at a cost of hundreds of billions of dollars, is halfway through. Russian defense spending increased by one-third this year, and should reach $96 billion by 2016.

Next week the world will see the fruits of that program, when the new might of the Russian Ground Forces will be on display at Moscow’s seventieth anniversary Victory Day parade. Several new vehicles, including the Armata tank and Kurganets infantry fighting vehicle, have already been spotted during parade practice.

All of these new vehicles—as well as the aggressive foreign policy behind them—do not bode well for a NATO that has been enthusiastically dumping its tanks. The Russians are still serious about state-versus-state land warfare.

The next-generation tank for the Russian Ground Forces, Armata is a long-overdue replacement for the T-72/T-80/T-90 series of tanks. Armata is expected to be a totally new design, a clean break from the T-72 series that has dominated the Soviet/Russian tank force since the late 1970s.

Developed under a veil of secrecy, there is little confirmed about Armata. However, images of the mysterious tank have leaked out of Russia in recent weeks during the lead-up to the Victory Day parade in Moscow, where it is expected to be officially unveiled.

The turret and main gun are covered canvas in the leaked photographs. Regardless, we can make some pretty good guesses about the tank’s ultimate configuration. Armata is expected to mount a brand-new crewless turret armed with a 125-millimeter main gun. It will almost certainly stick with an autoloader, keeping crew count at three. The tank will also have a remote weapons system on top of the turret, probably armed with a heavy machine gun.

Concept drawings have depicted Armata with a turret-mounted 30-millimeter autocannon and two machine guns, but the shape of the canvas-covered turret seems to point only to a single additional machine gun in addition to the main gun.

Armata is expected to be heavier than previous Russian tanks, and indeed has seven road wheels instead of the six normally seen on the T-72 series. This will give the design room to grow over the coming decades, including carrying a larger main gun and ammunition if and when the Russians decide they need it. Armata appears to have a modular armor system, making damage easier to replace during wartime, with armored side skirts and slatted armor protecting the engine compartment. Armata will almost certainly include active and passive protection systems similar to those mounted on the T-90.

The Russian Defense Ministry expects to receive 2,300 Armata tanks by 2020, replacing 70 percent of the existing Russian tank fleet. Although Russian industry has a reputation for herculean feats when it comes to tank production, going from building zero tanks a year to more than eight hundred is an unrealistic goal.

Armata is expected to be the foundation of a family of heavy combat vehicles. A heavy infantry fighting vehicle variant, T-15, has been sighted and is also expected to make its debut at the parade.

The T-90 was a post–Cold War tank for a Russia without the finances to pursue a new design. The T-90 is an improvement of the T-72B, as though the Russian Defense Ministry preferred to pretend T-80 had never happened. The T-90 retains the general layout of the T-72 series, including the hull, turret, main gun and diesel engine, but its general shape is distorted by the considerable amount of add-ons that make a modern T-90.

The T-90’s 2A46M 125-millimeter smoothbore gun is the same as that in the T-64, T-72 and T-80. The 2A46M fires high-explosive anti-tank and kinetic-energy rounds. It can also fire the Refleks guided missile, engaging armored vehicles and even slow, low flying aircraft at ranges exceeding that of regular gun rounds. Supplemental armament consists of a 12.7-millimeter heavy machine gun and a coaxial 7.62-millimeter machine gun.

The total number of T-90s produced is thought to be around 1,600, a large portion of which is owned by the Indian Army.

Tall and boxy, Kurganets is a radical departure from the short and squat BMP. Outwardly, Kurganets resembles Western infantry fighting vehicles such as the Bradley, Warrior and CV-90. Kurganets is amphibious, equipped with a water jets and trim vane. Various reports credit it with the ability to carry six-to-eight soldiers in the vehicle’s passenger compartment.

Kurganets’ appears to be equipped with modular armor. Its level of protection is unknown, but must be greater than the BMP as a trade-off against a higher profile. It is also likely to be protected by the same active and passive protection systems as the T-90—after all, in addition to the crew, it carries an entire squad of Russian infantrymen.

Like Armata, Kurganets’ turret is covered with canvas, likely until day of the parade. It appears tiny, jibing with rumors that it features an unmanned turret armed with a 30-millimeter 2A42 automatic cannon and four Kornet-EM anti-tank missiles.

Also like Armata, Kurganets is to be a common hull for an entire family of armored vehicles, including an infantry fighting vehicle, command and control vehicle, mortar carrier and ambulance.

The BM-30 launch vehicle weighs just over 40 tons and is capable of moving at 60 kilometers an hour. The BM-30 can move into position and be ready to fire in three minutes, and fire all twelve rockets in 38 seconds. With a displacement time of two minutes, under ideal conditions the BM-30 can “shoot and scoot” to avoid counterbattery fire in less than six minutes.

One limitation of the BM-30 is its inability to shoot at close-range targets, a rare limitation in an army where every single major weapons system must be able to engage enemy tanks by direct fire. The minimum range for rockets is 20 kilometers, and the maximum range is 70 kilometers.

Koalitsiya resembles Russia’s current self-propelled howitzer, Msta. It appears to use the same 152-millimeter gun as the older system, albeit longer by four barrel widths. The longer barrel and enhanced muzzle brake suggests the howitzer will have a longer range than Msta’s 18 miles (22 with rocket-assisted projectiles.) Msta’s muzzle brake also has three baffles, while Koalitsiya has five.