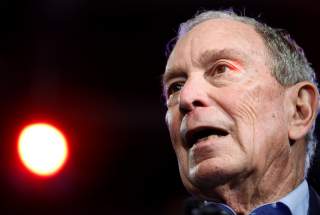 Next to Donald Trump, Mike Bloomberg was the Democratic Party’s favorite punching bag. Elizabeth Warren torched him on the debate stage Las Vegas, Nevada, as an aloof, isolated plutocrat who demeaned women at his company and refused to apologize for it. Bernie Sanders labeled him a man who was so wealthy that is was almost criminal. Joe Biden wasn’t timid with the former New York City mayor either, calling Bloomberg’s stop-and-frisk policing policy in minority communities “abhorrent” and a “violation of every right people have.” Bloomberg, participating in his first debate in nearly a decade, was stammering for a rebuttal.

Normally, a bad debate performance will frighten donors and cause them to reevaluate whether they bet on the right horse. As one of the richest people on the planet with a net worth of $60 billion, Bloomberg didn’t have to worry about placating donors and continued with his quixotic presidential campaign. Bloomberg’s entire campaign strategy was programmed to embrace the financial resources he had, optics be damned, and blanket the airways with positive advertisements vouching for his 12-year stint as mayor of the largest city in the country, his business acumen, and his ability to put Trump through the wringer. Bloomberg unapologetically skipped the first four primary states and devoted his entire effort to the 14 states that voted on Super Tuesday, spending a half a billion dollars on commercials and assembling an operation that even campaign veterans admitted was impressive.

At first, it looked as if Bloomberg’s strategy was paying off. The former mayor was rising in the polls and giving Joe Biden’s campaign heartburn. At one point, Bloomberg was in second-place nationally. Things looked promising—until Democratic voters saw Bloomberg without the mask of paid advertising.

For Bloomberg, Super Tuesday was the political version of the 1987 crash on Wall St. The hundreds of millions of dollars he invested netted him a grand total of 18 delegates nationwide—roughly $18 million per delegate. In Virginia, where Bloomberg spent about $18 million on television, radio, and digital advertising to Biden’s $360,000, the New Yorker wasn’t even viable. The same disappointing result occurred in North Carolina, where Bloomberg’s $17 million investment earned him 13% of the vote (again, not viable). By the time the night was over, Bloomberg flew back to his New York headquarters conversing with his staff about reassessing the campaign. This is not what Bloomberg was hoping for, to put it mildly.

When it comes down to it, Mike Bloomberg is a numbers man. Whereas other candidates running for president might try to rationalize why they should stay in the race, hold on for dear hope, and stick it out until the convention, Bloomberg isn’t much for emotional decision-making. He doesn’t need the presidency. Indeed, Bloomberg didn’t even look like he actually wanted the job. The mayor wanted to project an image of himself as a technocrat’s technocrat, somebody who will make the difficult decisions that need to be made for the good of the country. But he came off as an automatron without human qualities like emotion, empathy, regret, or drive. It certainly didn’t help that Bloomberg was once a Republican, said nice things about Trump in the past, and carried a lot of baggage from his time as mayor.

Bloomberg’s decision to drop out of the presidential race was so very “Bloombergian": based on delegate math and an unsentimental, quantitative forecast of the path ahead. Once he folded up his tent and went home, the New Yorker immediately endorsed Biden, the Democratic Party’s establishment favorite who is now on the upsurge after defying all expectations at the polls last night.  It was a sensible thing.

The mayor need not worry: the same Democrats nationwide who were pounding him as an elitist and political chameleon will be more than happy to take his money if it means increasing the odds of defeating Donald Trump in the fall.