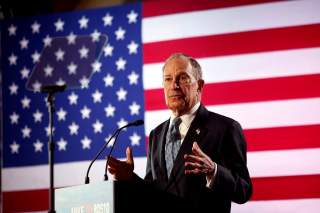 There is one individual every Democratic presidential candidate on the stump loves to hate. And no, his name isn’t Donald Trump.

Michael Bloomberg, the multi-billionaire businessman, philanthropist, and former New York City mayor, is one of those candidates who has no business running for president as a Democrat. That’s at least the sentiment one hears from his competitors, all whom have either been loyal Democrats for decades or proudly represent the kinds of progressive policies and values that one typically associates with a Democratic officeholder. Bloomberg may be a progressive on certain issues; he has spent tens of millions of dollars on causes related to gun control and the environment. But on others, such as crime and the economy, the Republican-turned-Independent-turned Democrat is outside what could be called the progressive mainstream. Nobody is going to compare Michael Bloomberg with Franklin Delano Roosevelt anytime soon.

For the three-term New York mayor, none of the griping matters. He has a boatload of cash at his disposal—$64 billion according to Forbes Magazine—and he intends to use a portion of that money to introduce himself to voters across the country. Taking a page out of Rudy Giuliani’s 2008 campaign playbook (a campaign that sputtered and blew up in Florida), Bloomberg is skipping the first four states and sprinkling his fortune on the 14 states that will vote on Super Tuesday. He has spent $124 million on advertisements in these states, including delegate-rich California, to boost his name recognition and convince Democrats who wouldn’t be able to stand another four years of Trump to cast a ballot for a sensible moderate. Bloomberg has written a $5 million check just to cover Facebook expenses. In the two months since he declared his candidacy, he has dropped $300 million of his own money. The Bloomberg campaign’s strategy relies completely on ads and commercials: if you bombard the airways with 30-second self-promotional spots just enough, the voters will eventually come into your corner.

The other candidates in the race can’t stand Bloomberg’s strategy and have equated it to something a Russian oligarch would do. Elizabeth Warren accused Bloomberg of treating American democracy as if it were an auction, where the highest bidder wins the presidency. Speaking on Meet the Press last weekend, Klobuchar essentially described the billionaire ex-mayor as a spoiled rich kid hiding behind his money. Ditto Joe Biden, who doubted the New Yorker could “buy an election.” Candidates are disturbed that Bloomberg would be as shameless on the ad buying as he has been to date, as if one of the richest people in America wouldn’t utilize the biggest weapon at his disposal.

Campaign advertisements can be comically cheesy. They tend to be riddled with disinformation, happy talk, and exaggerations. They can also be annoying; one moment you’re watching your favorite show, the next moment you have to swallow an ad touting a politician’s record and explaining why the country would descend into the depths of hell if you don’t vote for him or her. Most Americans either turn the channel, hit the mute button, or leave the room. Who believes the commercials anyway?

Yet in Bloomberg’s case, the hundreds of millions of dollars in ads may be having an impact. Despite not participating in a single televised debate and staying away from the first four contests, Bloomberg is third nationally with over 14% in the polls, in front of Warren and Pete Buttigieg. Despite his strong support for stop-and-frisk police tactics during his tenure as mayor—support he has since disavowed and apologized for—a Quinnipiac poll placed Bloomberg only behind Biden in terms of African American support. The other candidates, the ones actually barnstorming through the early states and putting in the work of building a rapport with voters, are apoplectic at the numbers.

Of course, this could all be the calm before the storm. Michael Bloomberg has a ton of cash lying around, but his mayoral record, comments, speeches, and lawsuits alleging sexual harassment at his company aren’t going away. He hasn’t been vetted like the others.

Candidates, however, are beginning to take notice. You can be darn sure that if he survives through Super Tuesday, Bloomberg’s face will be on dartboards in the headquarters and field offices of numerous campaigns.