8 Films That Remind Us Why We Chant U.S.A. 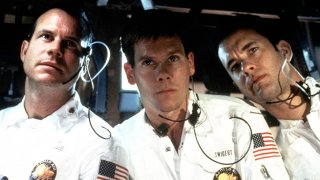 Sometimes even The Greatest (1977) needs a pat on the back. Here’s to you, America!

Sure, we are looking at tough times ahead. And, sure, China, Russia, Iran, and others of their ilk spread horrible lies about us to the world. Yet, we stand strong.

America has brought more to the world than most, serving as a flicker of hope in the darkest hours. This time will be no different. Expect the United States to emerge from this global epidemic as she went into it: a world leader.

#8. Tripoli (1950). Who would dare challenge the Barbary pirates, the scourge of the Mediterranean trade routes? Those upstart, newly independent Americans—that's who. Washington sends in the Marines. They show those pirates a thing or two—and even get the girl!

#7. The Fighting 69th (1940). Locked in the War to End All Wars, Europe faces its most desperate hour. Only one thing can turn the tide of battle: the United States goes “over there.” Mired in the muck of the trenches are those hard-scrabbled mugs from the Bowery: the fighting 69th Infantry Regiment. Give ‘em hell, boys! And they did!

#6. Merrill's Marauders (1962). It took lots of tough fighting to save the free world in World War II. None had it tougher than the American expedition in Burma, who battled the jungle, the heat, disease, and starvation—as well as the bad guys.

#5. The Big Lift (1950). In the early days of the Cold War, the Soviets decide to test U.S. resolve. They start by trying to starve out Allied-occupied West Berlin. “No way,” says the U.S. Air Force. They break the blockade with an unprecedented, and what many thought would be impossible, airlift.

#4. Retreat, Hell! (1952). As the Cold War heated up, the generals said there was one place we wouldn't have to fight: Korea. If only! No battle was more harrowing than the effort to survive the Chinese counterattack at Chosin Reservoir. In some of the toughest terrain and most appalling winter weather any modern army has seen, a U.S. Marine Division is thrown into the fight at the moment when the battle seems hopeless.

#3 Apollo 13 (1995). We were not only the first nation to put a man on the moon, we were the first to bring people back without getting them killed. Dealing with a real-life disaster tens-of-thousands of miles out in space requires a team effort. Fortunately, America had a great team—and duct tape.

#2. Miracle (2004). The Cold War was never colder than on the Olympic ice hockey rink, where a bunch of American college kids take on the Soviet squad, the most feared team in the world. But what do the odds-makers know? The red, white, and blue walk away with the gold.

#1. Argo (2012). The Iranian revolutionaries heap every humiliation they can think of on the United States. They didn’t figure on the courage and audacity of an American secret agent.

Keeping it going, America. What's your list of movies that make you want to shout “U-S-A, U-S-A”?

And, don't forget. The greatest days of this America’s next generation lie ahead. Someday, Hollywood will make movies about them. With God’s grace, they will be inspiring, too.