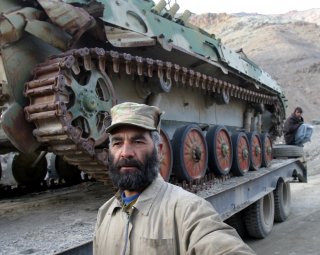 Thirty-three of Afghanistan’s thirty-four provinces fell to the Taliban over the span of two weeks in early August. The extremist group has since consolidated its control over Kabul, the nation’s capital, and the area around it. The sole area that has resisted Taliban encroachment has been the province of Panjshir, located in a valley at the foot of the Hindu Kush mountains. The region’s leader Ahmad Massoud, has repudiated the group and called for an open and democratic system within Afghanistan.

Massoud’s position appears to be militarily indefensible. The valley is fully surrounded by Taliban territory, and its defenders are highly outnumbered. Ahmad Shah Massoud, the father of the region’s leader, could rely upon overland supply lines into Tajikistan. But today, Ahmad Massoud has no method of resupplying except flights over Taliban territory. However, Panjshir’s defenders have been strengthened by the arrival of thousands of soldiers from the now-defunct Afghan National Army, which largely collapsed during the Taliban’s July–August offensive. The units in Panjshir include many of the nation’s special-forces units, which did much of the hardest fighting against the Taliban during the conflict. Massoud’s forces have also reportedly received military assistance from Tajikistan.

Panjshir’s position was also strengthened with the arrival of Afghanistan’s former vice president, Amrullah Saleh, who has since declared himself as the nation’s interim leader following the flight of President Ashraf Ghani to the United Arab Emirates. In the following days, other Afghan leaders, such as Defense Minister Bismillah Khan and Ahmad Zia Massoud, Massoud’s uncle and a long-time leader within Panjshir, have gone to the valley. Notorious Afghan warlord Abdul Rashid Dostum is also rumored to be present. While some experts on Afghanistan have highlighted potential tensions between the leaders, Saleh and Massoud appear to be cooperating, and both men have resolved not to surrender to the Taliban.

Both the Panjshir resistance and the Taliban initially committed to talks regarding Afghanistan’s future political system and the valley’s status, but these talks appear to have broken down. Taliban spokesman Zabihullah Mujahid announced on Sunday that hundreds of Taliban fighters had traveled to Panjshir to suppress the anti-Taliban resistance with force. While an early attempt to capture the province appeared to have been repelled by Ahmad Massoud’s forces, with a loss of three hundred Taliban fighters, the Taliban remains in control of the surrounding areas, and appears to have retaken three villages near the entrance to the valley, according to BBC’s Yalda Hakim. That means a larger attack on the resistance is only a matter of when and not if.