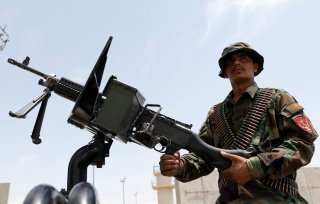 Within twenty-four hours of the U.S. withdrawal from Bagram Air Base, the base was entered and looted by Afghan locals, even though the country’s security forces have since retaken control of the facility.

U.S. military spokesmen described the U.S. withdrawal from Bagram Air Base and their replacement by local troops, as an “extensive process” that was conducted over the span of several weeks. However, Stars and Stripes correspondent J. P. Lawrence reported that, because of a lack of coordination between U.S. and Afghan troops at Bagram Air Base, the base was briefly left unguarded in the early morning following the Americans’ departure.

Consequently, at roughly 4 a.m., locals from the nearby town of Bagram entered the base and ransacked it. They stole laptops, gas canisters, and raw material to be sold for scrap.

Darwaish Raufi, Afghanistan’s district administrator for Bagram Air Base, told the Associated Press on Friday that dozens of looters had entered the base through its unguarded main gate. He added that many of the looters had been arrested after ransacking several buildings and the remainder had been cleared from the base. Afghan security forces are once again in full control of the base.

Raufi blamed poor communication between U.S. and Afghan troops for the error. “Unfortunately, the Americans left without any coordination with Bagram district officials or the governor’s office,” he claimed, although U.S. military spokesmen have denied this.

In previous base withdrawals, the facilities were turned over to Afghan security forces after U.S. departure. These security forces are tasked with maintaining order in their absence. That intruders were able to quickly access the base is another embarrassment for Afghan troops, who have faced persistent challenges throughout the latest iteration of Afghanistan’s forty-year war.

Bagram, the largest airbase in Afghanistan, was originally constructed by Soviet engineers in the 1950s; it later came under Soviet control and was used as a major staging area during the ten-year Soviet war in Afghanistan.

Following the U.S.-led invasion in 2001, it served as the center of American operations in the country for nearly twenty years. In the early 2010s, at the height of the war, roughly one hundred thousand U.S. troops passed through the base, although this number later declined precipitously.

The Taliban have welcomed U.S. withdrawal from Bagram. Taliban spokesman Zabihullah Mujahid tweeted on Friday, claiming that the militant group “consider[s] evacuation of all US forces from Bagram a positive step.”

Mujahid’s optimism is well-founded; in the absence of U.S. forces, the Taliban has seized control of vast tracts of rural Afghanistan and surrounded a number of provincial capitals.