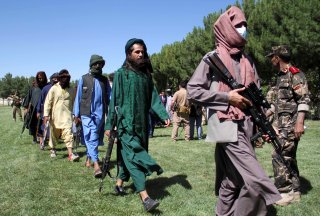 Following a week of intense fighting, the Taliban seized two additional capitals from the Afghan security forces on Tuesday—Pul-i-Khumri, capital of the northern Baghlam Province, and Farah City, capital of its western Farah Province.

On Tuesday, Taliban fighters seized control of Farah City’s government compound, the city’s police headquarters, and its prison, according to Al Jazeera. Some government sources have reported that fighting has continued around the city, but Taliban video footage revealed that the city was firmly under the country’s control. The remaining government forces have retreated to Farah City’s airport to await possible Afghan reinforcements.

The two additional conquests are added to the six capitals that the militant group already controls, leaving it with eight out of Afghanistan’s thirty-four regional centers fully under Taliban control. Alarmingly, six of the eight conquered capitals are in the country’s north, a predominantly non-Pashtun area with historical animosity towards the Taliban.

In addition to the eight capitals, the Taliban has been estimated to fully control four of the country’s provinces: Farah and Nimruz in the country’s west, and Jawzjan and Takhar in its northern areas.

The Taliban’s offensive—capturing eight capitals and scores of districts in the span of a week—reveals the critical weakness of the Afghan security forces, which often refuse to fight without assistance from Afghan commandos and air support. In at least two cities, government troops retreated from the city centers to the city airport, hoping that Afghan reinforcements would arrive from the air and help to launch a counterattack.

The Taliban’s decision to abandon its rural-based insurgency and to capture and hold cities marks a significant shift in the conflict, as American troops in the Central Asian nation begin their final departure. The Department of Defense has estimated that the U.S. withdrawal, slated to conclude by August 31, is 95 percent complete, and the Biden administration has not expressed any desire to delay or reverse it in light of the Taliban offensive. President Joe Biden expressed no regrets about the withdrawal, saying that the Afghan security forces “have got to fight for themselves.”

The Afghan government’s strategy has revolved around defending the country’s major urban areas, including Kabul, Kandahar, and Lashkar Gah. The Taliban have kept up their attacks, particularly on large cities in the country’s south and west—notably on Kandahar, the Taliban’s former capital, which remains in government hands. The group has also pushed into Fayzabad, capital of Afghanistan’s northernmost Badakhshan region; unconfirmed reports suggest that the city has already been captured.