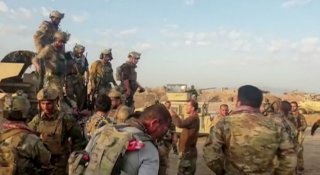 As the United States withdraws its forces from Afghanistan, it has left its bases, vehicles, and equipment in the hands of the Afghan National Army and Afghan National Police, the security forces of the government of Afghani President Ashraf Ghani.

On paper, this army is very impressive. It numbers approximately 300,000, in comparison to the Taliban’s 80,000. It possesses an air force and modern equipment and has received extensive training from U.S. and NATO advisers. In the field, however, the security forces’ performance has not lived up to these expectations; in recent weeks, the army has lost ground across the country, including in the far north, where the Taliban had little sway during its half-decade in power in the 1990s.

However, while the army has suffered from U.S. withdrawal, it has also launched operations independently of U.S. support, sometimes with a measure of success. On Saturday, July 10, following a Taliban incursion into the areas surrounding the provincial capital of Kunduz, Afghan security forces launched an operation to seize the city’s outer districts.

Although it is unclear if the operation was successful, an army commander claimed that it had been in remarks to Reuters: “During the past few days, the enemy carried out a massive offensive in the city of Kunduz, but they faced strong resistance from the Afghan forces and as a result, the enemy suffered heavy casualties."

The Taliban’s gains in northern Afghanistan have been particularly ominous. Two weeks ago, the militant group seized a series of Afghanistan’s major border crossings into its northern neighbor, Turkmenistan. The city of Kunduz, which briefly fell to the group in 2015, remains in government hands, but most of the districts within the province are now fully under Taliban control.

In February 2020, the Trump administration agreed to a peace deal with the Taliban, under which the United States would begin withdrawing troops by May 1, 2021 if the Taliban committed to ending its insurgency, participating in electoral politics, and distancing itself from terror groups including Al Qaeda. The Taliban did none of these things; however, in April, President Biden reaffirmed the decision to withdraw, claiming that all U.S. forces would depart by September 11.

The withdrawal is now mostly complete, although several senior officials remain in the country. The Pentagon has also stated that 650 U.S. troops will remain behind to guard the U.S. Embassy complex in Kabul.

While the Afghan armed forces will continue to lead the fight against the Taliban, there have been increasing reports of regional warlords forming private militias to fight independently of Kabul – perhaps under the impression that such militias will be more successful against the Taliban than the national army has been.