Off to Africa: Macron Set to Visit Algeria Amid Diplomatic Tensions 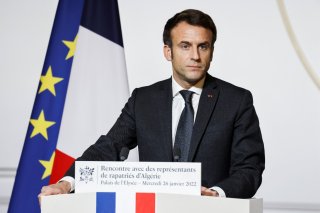 The office of French president Emmanuel Macron announced on Saturday that he would visit Algeria in the coming week in order to resolve an ongoing political feud between the two countries.

Macron’s upcoming visit will be his second trip to Algeria while president, and his first under the leadership of Algerian president Abdelmadjid Tebboune, who extended the invitation.

“This trip will contribute to deepening the bilateral relationship looking to the future,” a statement from Macron’s office read. It added that the purpose of the visit was to “reinforce Franco-Algerian cooperation in the face of regional challenges and to continue the work of addressing the past.”

The visit, scheduled to take place from August 25 to 27, appears intended to defuse tensions between Paris and Algiers following a series of incendiary remarks by Macron in October 2021. At the time, the French president accused Algeria’s leadership of distorting history and fomenting “hatred towards France,” compared the country’s political system to a military dictatorship, and questioned whether Algeria had existed as a country before France’s initial colonial invasion in 1830. Algeria responded to those comments by withdrawing its ambassador from Paris and banning French military aircraft from Algerian airspace.

France and Algeria have had a long and complicated relationship. Following France’s invasion, it gradually consolidated its rule in northern Africa and established the borders of the modern nation as a French colony over the following century. During and after the Second World War, French leaders argued that Algeria was not a colony but a part of metropolitan France, and hundreds of thousands of French immigrants, or Pieds-Noirs, resettled in Algiers and other northern Algerian cities. However, many native Algerians opposed French rule and sought independence, leading to a brutal civil war from 1954 to 1962 in which at least 400,000-500,000 Algerians were killed. Although Algeria has nonetheless maintained close economic and cultural ties with France since its independence, many Algerians remain disaffected by France’s approach to the history of the war, including its refusal to offer any apology for the treatment of Algerians during the colonial period.

Algeria has also gained increased geopolitical relevance for Europe since the onset of the Russian invasion of Ukraine in February, which led France and other European Union (EU) countries to place sharp restrictions on Russian natural gas imports. To make up for the shortfall, the EU has sought to increase its imports from Algeria, Africa’s largest exporter—leading several EU member states to pursue good relations with Algiers.