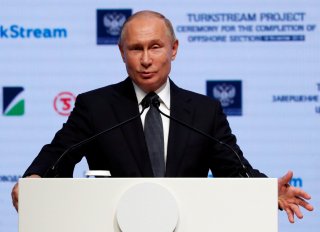 Russian state-owned energy giant Gazprom announced on Monday that it intended to reduce gas supplies to Germany via the Nord Stream 1 pipeline to one-fifth the pipeline’s total capacity, further restricting Germany’s energy imports as Berlin scrambles to find alternative sources of natural gas in preparation for the coming winter.

Spokesmen for the company claimed that the total transit through the pipeline would decrease to thirty-three million cubic meters per day, halving the supply of gas again following an earlier supply cut during maintenance to the pipeline. Although the initial maintenance period is said to have ended, the company claimed that it needed to halt the operation of a German-made gas turbine following a recommendation from a watchdog. However, Berlin disputed this defense, arguing that the restriction had been motivated by Germany’s opposition to Russia in the ongoing conflict in Ukraine.

“[Russian leader Vladimir Putin] is playing a perfidious game,” German economy minister Robert Habeck told the Deutsche Presse-Agentur news network on Monday. “He is trying to weaken the great support for Ukraine and drive a wedge into our society. To do this, he stirs up uncertainty and drives up prices.”

“We are countering this with unity and concentrated action,” the energy minister continued, noting the EU’s efforts to coordinate energy supplies among its twenty-seven member states and secure additional imports from abroad, most notably from the United States, Algeria, and Azerbaijan.

The Nord Stream 1 pipeline, which runs from the Russian city of Vyborg to the German city of Greifswald via an undersea pipeline in the Baltic Sea, is Russia’s largest natural gas link to Europe, exporting as much as fifty-five billion cubic meters of gas per year. The Kremlin has denied attempting to fix energy prices, claiming that any disrepair in the Nord Stream 1 pipeline could be attributed to the negative effects of Western sanctions on the Russian economy.

On Monday, Ukraine lauded Germany’s attempts to reduce its gas dependence on Moscow, with Ukrainian president Volodymyr Zelensky arguing that Russia was involved in an “open gas war” and warning that Russian actions would lead to impoverishment within Ukraine and around the world.

“They don’t care what will happen to people, how they will suffer,” Zelensky said. “These are just different forms of terror. That is why you have to hit back.”