Azerbaijan Is Ready To Supply Natural Gas To Europe 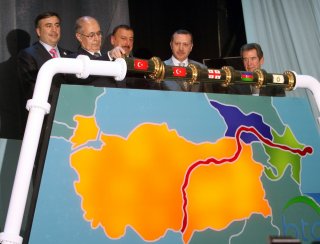 Due to its rich hydrocarbon resources, the Caspian region is attracting the attention of many regional and non-regional states. Azerbaijan, with its rich crude oil and natural gas reserves, is an important energy player in this region. According to the BP Statistical Review of World Energy 2020, the country's total proved natural gas reserves are equal to 2.8 trillion cubic meters (tcm) at the end of 2019. In addition, the current Bulla-Deniz, Umid, Babek fields, and the future planned Shafag-Asiman structure, Absheron, Nakhchivan, Zafar, Mashal, Karabakh, Ashrafi, and Dan Ulduzu natural gas fields will increase Azerbaijan’s current natural gas capacity.

To become a net gas exporter, Azerbaijan needed transit infrastructure to supply the natural gas from the Caspian Sea to Europe. Therefore, the key elements of the Southern Gas Corridor (SGC) project, such as the full-scale development of the Shah Deniz gas condensate field, the expansion of the South Caucasus Pipeline (SCPX), the Trans-Anatolian Natural Gas Pipeline (TANAP) project, and the Trans-Adriatic Pipeline (TAP) project, were crucial energy infrastructures, as well as one of the key factors for the efficient management of energy resources.

Towards this end, Azerbaijan also managed to establish a viable producer-consumer dialogue on a mutually advantageous basis with Western countries to attract foreign capital investment into its energy industry. The European Union is interested in the Caspian Basin countries such as Azerbaijan and Turkmenistan to diversify its energy supply routes and sources. Along with Azerbaijan, Turkmenistan has large natural gas reserves in the Caspian Sea, making the country a valuable player for future energy cooperation. Therefore, the SGC project will play an important role for European energy security as well as future regional energy integration process.

The TAP pipeline, with an estimated cost of 4.5 billion Euros, is crucial to export natural gas from Shah Deniz Stage 2 (SD2) to Europe. TAP connects Greece, Albania, and, as a final destination, Italy where the pipeline links up to the Italian natural gas grid operated by Snam Rete Gas. This has been a remarkable year for TAP. By the end of August, the TAP project was almost 98 percent complete. On November 25, the TAP AG started to introduce the first natural gas into a 2 km section of the pipeline in Greece between the Evros River and the Kipoi compressor station. Finally, in October 2020 TAP was filled with natural gas from the Greek-Turkish border up to the pipeline receiving terminal in Southern Italy. According to the TAP AG consortium,

“TAP is currently finalizing preparations for launching the commercial operations and offering capacity to the market in alignment with the adjacent TSOs. The Interconnection Point between TAP pipeline and the natural gas transmission system of Snam Rete Gas in Puglia is expected to be completed and ready to transport gas by mid-November 2020.”

It means that the TAP pipeline has been completed, and this coming November all segments of the 3,500 kilometers SGC that stretches from Azerbaijan to Italy will be online. In 2020 TAP AG also signed an agreement with PRISMA European Capacity Platform GmbH, which aimed to establish a fair and transparent market by facilitating the integration and security of gas capacity trade.

The SGC is very important both from a geopolitical and geoeconomic perspective. Firstly, it will export natural gas from SD2 to Europe. Azerbaijan will be able to increase its energy revenues and become a net gas exporter for the European energy consumers. Secondly, the project supports regional cooperation and EU energy security. The TAP project also opens the door for Caspian natural gas to European energy markets, and in the future, large volumes of the Caspian gas may enter the European gas markets via TAP. In fact, the SGC project has a strategic value for the whole Eurasian continent.

The TAP project will diversify EU energy supply sources and routes. The pipeline will initially carry around 16 bcm/a (billon cubic meters per annum) of natural gas, and a future expansion will increase the pipeline's capacity to a throughput of 20 bcm/a. The SCG has already started 6 bcm/a of natural gas delivery for the Turkish gas market, and Turkey is set to purchase more Azerbaijani natural gas. For the period between January-July 2020, 6.3 bcm of natural gas was supplied, and as of March 2020, Azerbaijan was first place in the Turkish gas market with 23.45 percent of the country's gas supply.

Bulgaria and Greece have also a contract to each import 1 bcm/a of natural gas from the SGC. The remaining eight bcm of gas will enter Italy, where the gas will be distributed among other buyers. Given that, Azerbaijani gas supplies will reach South Eastern, Central, and Western Europe.

This volume of gas is important as European energy consumers want to decrease their high dependence on a few exports. Analysis of the European gas markets shows that European consumers have a high dependence ratio on Russian gas, and new sources of natural gas will reduce such dependence. So far, it is obvious that new gas sources from the SGC and the increasing share of LNG are important supply sources for diversification.

It is worth noting that the SGC is not aimed to compete with Gazprom's natural gas supplies in the European energy markets. Gazprom is the largest supplier of natural gas to Europe, and the main goal of the company is to save its market share and improve efficiency by implementing different energy projects. In 2019, Gazprom exported to Europe around 199 bcm of gas. So, the SGC with 10 bcm/a for Europe at the initial stage is important as an alternative supply source. Only with increased capacity, the SGC will be able to improve conditions and make the gas market more competitive.

In conclusion, today, Azerbaijan can be proud of its inter-regional energy projects, which supply Caspian energy resources to global energy markets. It should be highlighted that the recent war between Armenian and Azerbaijan threatened the inter-regional energy projects as Armenian aimed to destroy Azerbaijan's critical energy infrastructure. However, their attempt was unsuccessful, and Azerbaijan will export the Caspian natural gas to the European energy markets and strengthen its economic power.