After 10 Years of War, Who Speaks For Syria? 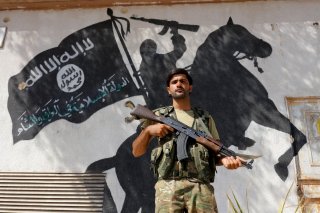 The Syrian Revolution approaches its tenth anniversary on March 15. A decade ago, ordinary Syrians, deprived of their dignity and robbed of their security by a self-dealing, violent regime, rose peacefully as others had done in Tunisia, Egypt, Libya, and Yemen. Ten years later, a family crime syndicate remains in place, having been saved and sustained by Russia and Iran.

Syria has become among the worst models of the Arab Spring, believed once to end corruption and improve political and economic injustices across the Middle East and North Africa.

Those who have waged war on the Syrian people cannot speak for them. So, who does?

The uprisings of March 2011 in Deraa and Damascus were spontaneous. The people poured out their hearts and raised their voices against police brutality and savage detentions. In return, these peaceful demonstrators encountered the Assad regime’s deadly lethality, which in turn inspired the demonstrations to spread nationwide.

Syrians defending themselves against the regime’s merciless killers were not waiting to take orders from a nonexistent commander. They decided on their own, in hundreds of different places and ultimately with millions of independent voices, that a government interested only in domination and self-enrichment simply had to go. There was no single address at which the authorized, anointed spokesperson and “decider” for these millions resided. But it certainly was not and is not Assad.

Bashar al-Assad continues to speak for and represent only a family and a clique that is farming Syria for revenue, to benefit his own bottom line, even as it destroys the country in a vicious campaign directed against civilians. He continues to commit UN-documented crimes and serving as the single point of contact for foreign actors occupying and exploiting Syria through him. And as for others who believe that engaging him diplomatically will somehow, after a ten-year rampage, now elicit a civilized response, they are only enabling a madman to stay in power at all costs.

The Syrian Revolution, like its American predecessor, is not commanded by a Fidel Castro-like personality. American officials who have sometimes criticized as disunited and leaderless the opposition to Assad’s mass murder—criticism perhaps intended to deflect blame for red lines erased and civilians undefended from mass slaughter—seemed to forget that George Washington never purported to speak for colonists rebelling against the Crown. Neither did he establish a republic as the head of a junta. What, after all, would it benefit Syrians rising against tyranny to try to mimic organizationally those who murder, terrorize, and torture them? Does the American experience of sealing a revolution by creating a constitutional republic not provide a better model?

When the United States declined to mount a significant challenge to a regime driving terrified refugees into neighboring countries and beyond, the exiled opposition had no choice but to accommodate itself to the interests of regional hosts and supporters—interests not necessarily corresponding to those of Syrians inside Syria—while Syrians opposing the regime inside the country braved barrel bombs and chemical assaults. Turkey and Saudi Arabia, both of which supported the Revolution and simultaneously, put their own interests before Syria’s became the principal sponsors of opposition movements. This did not help; these sponsors and others in Doha, Cairo, and Moscow, too, only added to the fragmentation of Syria’s opposition. In all cases, that opposition had to tailor its support for Syrians inside Syria to the interests of their paymasters.

Aligning a free Syria—which we believe can occur in the near future—with the West has been a long-lasting dream of the Syrian mainstream for decades. This sentiment is not uniquely Syrian, but it is most definitely Syrian also. My own story is one that pierces through the layers of all-too-familiar scar tissue that has grown around the hearts of the Syrian people. I was born and raised in a Damascus suburb before immigrating to the United States. I have traveled back to my homeland in the past decade, and saw first-hand the destruction, displacement, and deep loss suffered by my countrymen and women. I went to Syria so that I could return to America, my new home, to tell anyone who would listen that the United States must do more to save Syria.

The Syrian people are interested, more than ever, in getting their country back. Syria can be a positive influence on the Middle East again, as it once was, in the fields of education and business, and more.

In the meantime, however, the chorus of voices seeking to speak for us Syrians must end. As Syrian-Americans, we are privileged and grateful to live in a country where peaceful advocacy is honored and protected. We are uniquely positioned to speak for Syrians demanding democracy and rule of law without fear of being silenced or subordinated to a political agenda or worse.

We see no contradiction at all between a truly democratic Syria—a Syria where rule of law reigns supreme for all Syrians irrespective of ethnicity and sect—and the interests of the United States. The opposite is true. We also see a stable Syria at peace—honorable peace—with all its neighbors as a worthy U.S. foreign policy goal. A Syria free of Assad and an end to foreign influence that only radicalizes Syria will also make America safer.

While no one person or faction speaks authoritatively for Syria or Syrians, the task of building a new Syria will be in the hands of those who have suffered at the hands of the Assad regime’s brutality in the past decade, and those who suffered from that brutality firsthand going back a couple of generations before the 2011 uprising.

As Syrians who came to America in their youth or later in life, we must add our voices to urge the U.S. government to commit itself to Syria’s political transition, to continue to provide humanitarian aid to all Syrians in need and, with the support of our allies, to defend Syrian civilians from a tyrant that is responsible for a genocide in his home. The Syrian diaspora, uniquely positioned, must weigh-in as a vital voice of the Syrian people. To paraphrase President Joe Biden, U.S. foreign policy must also be driven by and in the interest of every day Americans. We, as Syrian-Americans, can do so, must do so, with the knowledge that a free Syria will enjoy a relationship of friendship, mutual respect, and equality with our adopted country. Syrian-Americans seeking freedom, independence, and genuine self-determination for their country of origin speak with a collective voice on behalf of our “voiceless” brothers, sisters, mothers, and fathers in Syria. Our voices are our own, monitored and controlled by no one. Our silence serves no one, except a regime fully in the service of others. Our voices are rising and will be heard unlike ever before—for the sake of all Syrians.

Dr. Muhammad Bakr Ghbeis is the president of Citizens for a Secure and Safe America, a US non-profit organization dedicated to promoting democracy in Syria so that its citizens may have the opportunity to live in a free, fair and prosperous country. The organization believes that an open and democratic Syria will also lead to a safer, more secure America.