After 20 Years of War, We Must Protect Our Veterans 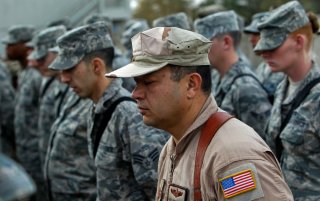 The final withdrawal of our troops from Afghanistan and the inglorious collapse of its democratic government has left many veterans hurting, mentally and physically.

More than 53,000 American service members were wounded in action in Iraq, Afghanistan, and over two dozen other countries where the war on terror touched in the aftermath of 9/11. Even more suffered injuries and long-term health problems through training accidents and the rigors of daily military life.

During a 20-year career, Air Force orders sent me to twelve countries, earning me expeditionary, campaign, and combat zone service medals alongside a few other “forever gifts.” Without the good advice I received about veteran disability benefits prior to retirement, my service-related medical problems would have gone largely undocumented.

Though the medals are a distant memory, the medical problems are not. Since government compensation increases with deteriorating chronic conditions, I recently applied to the Department of Veterans Affairs (VA) to have my medical records reviewed.

I’ve learned disabled veterans, for the moment, have better options than most Americans.

National Interest writer Trevor Filseth characterized the bureaucracy faced by non-veterans applying for disability benefits as a “byzantine process.” Essentially, the best hope for success afforded to disabled Americans is at the back end of the process—through the Social Security Administration’s appeals process.

The greatest chance of success for disabled veterans, however, is at the front end of the VA process.

Veterans have four options for filing initial or follow-on claims: We can get help from nonprofit veteran support organizations (VSOs), engage private consulting agents or, if filing an appeal on the back-end of the process, use accredited VA-paid claim agents (usually attorneys). Self-help is the last option, and for many a non-starter.

That’s because the VA isn’t necessarily any less byzantine than its civilian counterpart; while staffed by some of the most compassionate Americans I’ve ever met, it is excruciatingly difficult to navigate.

In addition to department complexity (VA websites and forms can be maddening), VA employees are, quite simply, understaffed and overworked. According to the Defense Department-run Stars & Stripes, more than 190,000 disability claims were recently backlogged, meaning four months without action. Those without internet connectivity, extraordinary deductive powers, and tons of spare time must seek third-party assistance.

Available for appeals only, the accredited VA claim agents are proxies of the government (without medical training) and get paid regardless of outcomes. This tends to sap both motivation and a sense of urgency from the process. So OK, but not great.

VSOs are well-motivated, mostly staffed by volunteers, and free. A good option.

The best option tends to be private consulting agents, the best of whom are veterans who have “been there, done that” many times over. Their business models are simple. If your claim is approved, they make money. If not, they don’t. They are proficient at navigating the VA’s cumbersome pathways and they truly grasp VA medical expectations and requirements.

And they may soon be out of a job.

President Joe Biden’s fiscal 2022 VA budget request carries forward a prior attempt in Congress to amend Title 38 of the U.S. Code so “individuals could no longer become accredited as claims agents for purposes of preparing, presenting, or prosecuting claims for VA benefits.”

Though well-intentioned, this effort to remove “bad actors” from the scene demonstrates typical government inefficiency. The proposal will setback the VA to pre-Bush era support levels by disposing of the most convenient and proven means for veterans to retrieve their benefits. It also calls constitutionality into question: By what right does government restrict whom I may employ to help petition the government for my due benefits?

I sought application assistance from Jon and Jamie Smith—a military-disabled, husband-wife team living in Central California. Like other consulting agents, they have navigated the VA labyrinth on their own personal journeys.

A combat medic and bronze star recipient, Jon was blown into the side of a Humvee during his 2008 tour of Iraq, a blast that left him a leg held together by one ligament. Ten surgeries followed. The Army medically discharged Jamie after a botched C-section at Walter Reed Army Medical Center in Washington, DC.

Helping veterans access benefits became part of their healing process. Since 2020 they have helped more than 100 veterans gain deserved but previously elusive benefits.

Some folks in Washington are now trying to rid us of a usury problem by tossing the baby out with the bathwater. They would discharge the Smiths and others like them from providing further assistance to their brothers and sisters in arms. Our leaders should not so carelessly disregard the capability of those most capable of serving our nation’s veterans.

The best solution is to add to the accreditation process enough rigor to eliminate scammers and allow reputable agents to vet through and receive the VA’s stamp of approval. Administrators can then turn their efforts toward better serving veterans still awaiting their benefits.