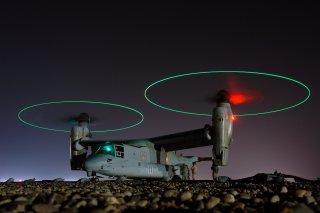 The U.S. Air Force and Bell Boeing are working to refine and sustain engine technology for the high-performing service variant of the CV-22 Osprey tiltrotor, by retrofitting new improvements to the “nacelle” or engine encasement of the aircraft.

The Air Force-Boeing $81 million deal, according to a Pentagon announcement, involves “non-recurring engineering support as well as the recurring procurement of kits and installs in support of the forced retrofit fleet implementation and installation of nacelle improvements and the conversion area harness onto the CV-22 aircraft for the Air Force.”

Improvements to the boundary or casing of an engine could incorporate a number of interesting variables such as durability, fuel-efficiency, weight and aerodynamic drag, propulsion power, or heat signature management. Perhaps some or even all of the above are part of the equation, with the motivation being to preserve and sustain the promising service life of the Air Force Osprey.

Maintenance and upgrade efforts with the Osprey would make a lot of sense for the Osprey, given that the Navy, Marine Corps, and Air Force have all been expanding the mission envelope for the aircraft and building-in a number of sought-after upgrades. Fuselage or nacelle upgrades could certainly be intended to improve durability and further ruggedize the Osprey for higher-risk or austere combat environments. Perhaps an upgraded nacelle incorporates composite materials or metals less vulnerable to incoming enemy small arms fire.

Yet another variable which may almost seem too obvious to point out is simple..speed. Newer variants of the Osprey have increasingly been drawing upon speed-enhancing innovations to, at least in the case of the new Navy Osprey, increase range, fuel-efficiency and operating velocity. Thrust-speed ratio can of course also impact maneuverability and the precise series of balances between helicopter-like maneuverability and hover capacity .. and airplane-like 220 knot or more airspeed.

It may also go without saying that engine casings can also help with thermal management or heat flow within an engine. The engine, which draws in air, compresses it, mixes it with fuel and ignites it to cause a small explosion generating thrust, might be improved through streamlined airflow enhancements. Also, while an Osprey is not necessarily engineered to achieve a stealth-like performance effect, heat signature management can impact survivability by potentially making the aircraft less vulnerable to thermal infrared sensors or incoming heat-seeking missiles with infrared guidance.

Broadly speaking, it is likely a fair characterization to view the nacelle upgrades as not only a sustainment effort, but a “ruggedizing” or hardening for increased combat missions. In recent years, the Marine Corps has been exploring potential requirements for arming the Osprey with offensive weapons, a possibility which could include firing laser-guided, Hydra 70 folding fin rockets, .50-cal machine guns, or even larger missiles such as a Hellfire. A specific path regarding the arming of the Osprey may not be known, yet the Marine Corps has for years talked about developing requirements and technologies to explore the option.

Kris Osborn is the defense editor for the National Interest.