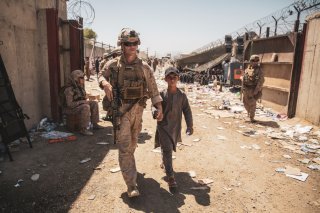 An internal review by the U.S. Air Force concluded that members of air crews involved in the evacuation of Afghan civilians from the Hamid Karzai International Airport—an airlift that ultimately removed more than 120,000 people from Afghanistan over the span of two weeks—had acted appropriately and were not responsible for civilian deaths during the evacuation. Several Afghans clung to the wings or wheels of departing planes and fell to their deaths after the planes took off.

Air Force spokeswoman Ann Stefanek indicated in a statement on Monday that the aircrews had “exercised sound judgment in their decision to get airborne as quickly as possible when faced with an unprecedented and rapidly deteriorating security situation,” absolving them of responsibility for the incidents.

Videos from the first days of the evacuation, shared widely on social media, depicted thousands of Afghan civilians swarming departing U.S. military planes in an attempt to climb aboard. In one of the incidents examined in the review, desperate Afghans surrounded a departing C-17 transport plane, which departed almost immediately; a viral video showed two people falling from the wheels of the plane after they retracted into the wheel well. Further human remains were found within the wheel well after the plane landed at the Al-Udeid Air Base in Qatar, where most of the evacuees were eventually taken.

Stefanek described the incident as a “tragic event,” adding that “our hearts go out to the families of the deceased.” She emphasized that after a review by the Air Force Office of Special Investigations, the aircrew had been commended, claiming that the planes had been at risk of being overrun on the ground, preventing them from taking off, and that the pilots’ “airmanship and quick thinking ensured the safety of the crew and their aircraft.”

“After seeing appropriate care and services to help cope with any trauma from this unprecedented experience, the crew returned to flight status,” she added.

It is still unclear how many Afghans died in the wheel well incident, and the footage shows it at such a distance that a third person might have fallen from the aircraft as well. At least two Afghans, Shafiullah Hotak and Fida Mohammad, were identified as fatalities, and the body of a third, former Afghan youth soccer star Zaki Anwari, was identified in the wheel well in Qatar.