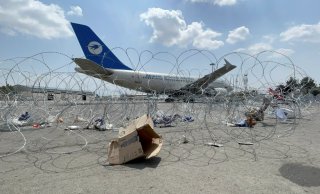 Although doubts were raised by Western experts and commentators about the feasibility of a full withdrawal by that date, as of 12:00 noon on August 31 in Kabul, the last U.S. flight has left the country, withdrawing the last remaining foreign troops.

The Taliban, whose spokesmen have claimed in statements that the presence of foreign troops represented a major challenge to the country’s stability, celebrated the withdrawal. Suhail Shaheen, one of the group’s long-time spokesmen, tweeted, “Tonight 12:00 pm (Afghanistan time) the last American soldier left Afghanistan. Our country gained full independence.”

The group has indicated that its next major challenge is asserting full control over the country, including defeating the presence of the Islamic State’s “Khorasan Province,” or ISIS-K, which was responsible for a high-profile terrorist attack on the airport that claimed the lives of more than a dozen U.S. troops and more than one hundred Afghan civilians. The group is also widely expected to intensify its military operations against the Panjshir Valley, which has held out against the group and remains the only province outside of the Taliban’s control.

Videos are already circulating of Taliban soldiers entering hangars at the airport, which U.S. and Afghan civilians had occupied hours earlier.

The final departure of U.S. troops from Afghanistan closes the book on America’s twenty-year war in the country, which has cost the lives of more than 2,400 American soldiers and tens of thousands of Afghans. According to official sources, at least 122,000 people have been evacuated from the Kabul airport since August 15, making the events of the past two weeks the largest known human airlift in history.

In Monday remarks, Marine Corps Gen. Kenneth McKenzie acknowledged that the Taliban had been “very helpful” in providing security at the airport during the withdrawal.

While it is unclear if all U.S. and European civilians have left the airport, and roughly 300 Americans are estimated to remain in Afghanistan, the Taliban has committed to allowing foreign nationals to leave the country. McKenzie underlined that while the military mission had ended, “the diplomatic mission to ensure additional U.S. citizens and eligible Afghans who want to leave continues.”