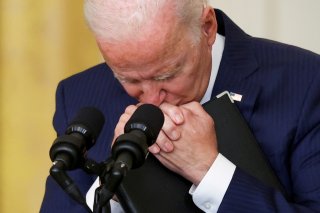 President Joe Biden committed the United States to retaliation against the group responsible for the Kabul airport attack on Thursday, saying that the United States would “hunt [them] down and make [them] pay.”

The attack, described by the Pentagon as “complex,” involved the detonation of a vehicle-based improvised explosive device (VBIED) in a suicide attack at the gate to the airport. The attack killed more than 100 people, including a dozen U.S. Marines, one Navy medic, and many Afghan civilians. Hundreds more were wounded in the attack, which represents the worst day for U.S. troops in Afghanistan in more than a decade since the 2011 shootdown of a Chinook helicopter that claimed the lives of thirty-eight U.S. military personnel.

The Islamic State of Iraq and Syria–Khorasan Province, or ISIS-K, is presumed to be responsible for the attack. The group has formally maintained its allegiance to the Islamic State of Iraq and Syria (ISIS), which has been territorially defeated in those two countries. Biden stated that the U.S. military would “develop operational plans” to strike back at ISIS-K, although the strikes might not happen immediately.

In his remarks, Biden stated that he and First Lady Jill Biden were “outraged” and “heartbroken” by the attack. The president expressed his sympathy for the victims’ parents and loved ones, citing the military service of his son Beau, who died of brain cancer in 2015.

Biden emphasized that the U.S. withdrawal would continue and would not deviate from its August 31 withdrawal deadline.

The president also acknowledged for the first time his own responsibility for the chaotic and disorganized withdrawal following the Afghan government’s collapse to the Taliban. However, Biden also expressed dismay at the February 2020 agreement that the administration of his predecessor, Donald Trump, negotiated with the group, which he said he disagreed with but was obligated to follow. In that agreement, thousands of Taliban veterans were released from prisons in Afghanistan, and many of them returned to the fight against the Afghan government, helping them to dismantle the Afghan National Army (ANA) and capture Kabul in less than two weeks in early August.

Marine Corps Gen. Kenneth McKenzie, the commander of U.S. Central Command, warned that ISIS-K was likely to continue its attacks on available U.S. targets. The Taliban, which is strongly opposed to ISIS-K, has publicly stated that it will not allow terror groups to conduct foreign attacks from Afghanistan, although the group still maintains cordial ties with Al Qaeda.