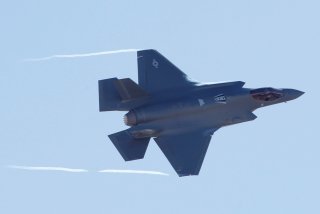 The United States Air Force’s F-35A, the conventional takeoff-and-landing variant of the Joint Strike Fighter, has had a notable summer as the advanced aircraft recently took part in the first-of-its-kind test to hone how the stealthy fighter could work in tandem with older aircraft to provide critical anti-air defense cover. On the other side of the world, the Air Force’s 421st Fighter Squadron announced that it had become the first F-35A unit to go on a status alert, which refers to the aircraft being prepared to scramble or launch airborne in response to a threat or other requirement in as little as five minutes.

“This hasn’t been done before with F-35s and operational control or at ADAB with F-35s,” Lt. Col. Stephen Redmond, 421st FlightSim commander, said in a statement. “It effectively adds another capability or tool in leadership’s toolkit for how to deter, defend, or respond to events in the region.”

During the two-day exercise at Nellis Air Force Base in Nevada, the F-35A flew along with F-22 Raptor and F-15E fighters from the Air Force, as well as the Navy’s E/A-18G Growler electronic warfare plane. The aim of the pairing of the fourth- and fifth-generation aircraft was to conduct electronic attack (EA) missions.

“Most people don’t think of F-35s as electronic warfare aircraft—but they are, and they are incredibly capable,” Mark Gunzinger, director for future concepts and technology assessments at the Mitchell Institute for Aerospace Studies, told Breaking Defense last week.

The $1.4 million Large Force Test Event, which was conducted by the 53rd Test and Evaluation Group from August 4-6, was designed to find solutions to Air Force prioritized Tactics Improvement Proposals for Suppression of Enemy Air Defense, low-observable ingress and electronic attack interoperability of the fourth- and fifth-generation aircraft.

As a result of the LFTE, the Air Force will be able to explore unique integration of tactics, techniques, and procedures that have never been tested together; in select capabilities and ultimately undertook testing, evaluation and tactics development for four TIPs established at the Air Force’s annual Weapons and Tactics Conference (WEPTAC). These include fifth-generation SEAD (Suppression of Enemy Air Defenses) support, effectiveness for B-2 Operations; Advanced Low Observable Ingress Tactics; fourth- and fifth-generation Joint and Coalition SEAD contracts; and fourth to fifth and fifth to fourth EA effectiveness.

The 53rd Test and Evaluation Group stressed that exercises such as this one are crucial to improving the joint fourth and fifth-generation tactics, which enhances the Air Force’s abilities in an advanced threat environment.

“An event of this size and scope must be heavily supported by Air Force operational leaders, and this LFTE was no exception,” said Col. Bill Creeden, commander, 53rd Test and Evaluation Group, via a statement. “The investment and trust in our team allowed the 53rd Wing to evaluate the interoperability of leading-edge capabilities and develop [tactics, techniques, and procedures] that will ultimately strengthen our nation’s air dominance.”