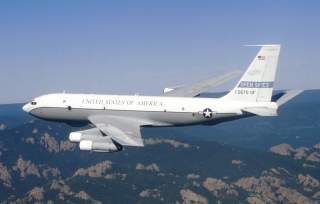 The two surveillance planes the U.S. Air Force uses to monitor Russian forces under the auspices of a 1992 arms-control treaty are old, in poor condition and barely flyable, records reveal.

Their toilets in particular are a problem.

On Dec. 6, 2018, the Air Force deployed one of the four-engine OC-135 planes to Ukraine at Kiev's request. The surveillance overflight presumably allowed the American, Canadian, German, French, Romanian and British observers aboard the plane to inspect Russian troops massing along the Russia-Ukraine border.

The flight came two weeks after Russian security forces illegally seized three Ukrainian navy boats attempting to pass through the narrow, Russian-controlled strait connecting the Black Sea and the smaller Sea of Azov. "The timing of this flight is intended to reaffirm U.S. commitment to Ukraine and other partner nations," the Pentagon stated.

The OC-135s are among the oldest aircraft in the U.S. military. The Air Force ordered both airframes in 1961. The flying branch converted them into OC-135 surveillance planes shortly after Washington and Moscow signed the Open Skies Treaty in 1992.

The treaty allows the 34 member states, including the United States and Russia, to fly over each other’s territories in order to photograph military installations and verify adherence to other treaties. A committee apportions the flights according to a quota system. During times of crisis, signatory governments legally can conduct "extraordinary" flights on short notice.

That was the authority under which the Air Force sent an OC-135 over Ukraine.

But there was always a high risk that mechanical failure would ground the plane, according to official data that George Sarris, a whistleblower and former OC-135 mechanic at Offutt Air Force Base in Nebraska, obtained from the Air Force and shared with The National Interest.

The OC-135 with the serial number 61-2670 has suffered repeated problems with its lavatory, including overflowing sanitary fluid, a leaking "pee tube" and a door that won't shut.

Maintenance discrepancy number 161230088, dated May 2, 2016, cited "excessive leaking" in the lavatory and compelled the OC-135 crew to abort a mission just before takeoff. "Imagine the significance to international security if that condition existed for the 'extraordinary mission' of  December 2018," Sarris commented.

For treaty opponents within the U.S. government, that's by design. Republicans in the U.S. House of Representatives orchestrated a years-long campaign to deprive the Air Force of funding for Open Skies operations, all in order to undermine the treaty and deprive Russia of reciprocal access to U.S. air space for its own inspection flights.

The Pentagon and the U.S. State Department disagree. Both agencies view the Open Skies flights as important means of gathering intelligence and signaling American resolve. "We stand with Ukraine against Russian provocative and threatening activity in the Sea of Azov," the State Department stated in its tweet announcing the Dec. 6, 2018 OC-135 mission.

But House Republicans, seemingly sharing Pres. Donald Trump's eagerness to tear up international agreements, denied the Air Force's request in the 2018 budget for $430 million to begin replacing the OC-135s with newer, more-reliable planes. The U.S. Senate restored the funding.

In January 2019, Democrats will take over control of the U.S. House for the first time in eight years after winning an historic number of seats during the 2018 midterm elections.

The change in party control could make it easier for the Air Force to maintain and upgrade its Open Skies planes. And that could make it less risky for the United States to signal support for imperiled allies such as Ukraine.