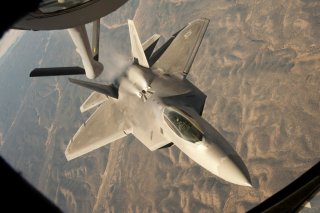 During the event, both directorates used the Directed Energy and Kinetic Energy Directed Energy Utility Concept Experiment, also known as DEKE DEUCE, to explore the “synergies between directed energy and kinetic concepts in the future battlespace,” an Air Force press release explained.

“DEKE DEUCE placed pilots, weapon systems officers and air battle managers in a series of virtual vignettes exploring mission sets that relate to the combined use of DE and KE systems,” the Air Force explained, adding that the experiment ties together “previous studies and analysis focused on an airborne high energy laser pod and two future kinetic concepts.”

“An urgent need exists to rapidly field and integrate viable next-generation weapons, both DE and KE, in response to increasing capabilities and aggressive intentions from our adversaries,” said Lewis. “This DEUCE focused on identifying capability and joint integration gaps that can be addressed by systems under consideration, as well as potential future tactics and procedures.”

An Energy and Real Estate Problem

The Air Force is not the only military branch interested in developing directed energy weapons. The U.S. Navy also has several horses in the race, cognizant of the advantages laser weapons would provide at sea.

The Navy, however, has a considerable advantage in terms of potential laser power. Unlike a relatively small fighter jet, a ship could generate more electrical power for a laser weapon. In addition, a naval ship has significantly more on-board real estate available for integrating one or more directed energy weapons.

Despite these limitations, the Air Force’s projects are moving forward at a fast clip. One of their notable initiatives is the Self-Protect High Energy Laser Demonstrator or SHiELD program. SHiELD is essentially a podded laser weapon that could be used in a defensive capability to fry incoming anti-aircraft missiles.

The Air Force has also tested a larger laser demonstrator, the Airborne High Energy Laser, or AHEL, on larger AC-130 aircraft for study.

Previously released information from the Air Force indicates that laser weapons that are both efficient and light-weight could be integrated onto fighters and accepted into service after 2029.

Although it will be some time before laser weapons are fully integrated into fighter jets, the Air Force is nonetheless prepping pilots for directed energy weapon’s eventual roll-out—though don’t expect to see laser weapons in service anytime soon.