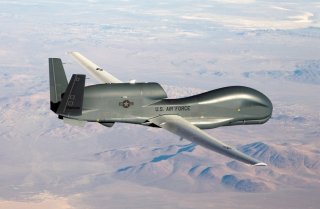 “Since October 2004, the RQ-4 Global Hawk nested and flocked the airspace at Beale,” a statement from the Beale Air Force Base explained. “However, the final RQ-4 Global Hawk assigned to the 12th Reconnaissance Squadron departed on July 7.”

The Global Hawk divestment from Beale is driven primarily by tough competition from non-state terror groups to near-peer state challengers.

“The RQ-4 Block 30, the most recent model to reside here, was divested from the U.S. Air Force as part of a plan to restructure intelligence, surveillance, and reconnaissance to meet national defense priorities and support joint all-domain command and control capabilities. The divestment also assists in funding modernization and increases capability to counter threats posed by near peer competitors like China and Russia.”

The capabilities of the RQ-4 are far-reaching, and the aircraft are engineered to be high-altitude, long-endurance, and equipped with integrated sensor suites to provide all-weather, day or night Intelligence, Surveillance, and Reconnaissance.

The Global Hawk and other similar unmanned aerial vehicles found their stride in the mid-2000s during the United States’ involvement in Afghanistan and Iraq. Given their significant payload capacity and high endurance, they could provide extended surveillance and offer troops on the ground an armed eye in the sky.

However, in a high-danger environment, the relatively slow Global Hawk—and an entire generation of similar American unmanned aerial vehicles—are no longer highly likely to survive against a rival with a dedicated and modern air defense capability.

The Beale statement explained that the “12th RS and Block 30 aircraft have provided critical ISR for a number of named operations to include: ENDURING FREEDOM, IRAQI FREEDOM, ODYSSEY DAWN, FREEDOMS SENTINAL, and NEW DAWN.” It added that “the Global Hawk has flown over 320,000 flight hours in support of global combatant command directives.”

A future priority for the U.S. Air Force is the new generation of unmanned aerial vehicles designed to foil air defenses; that is, UAVs with design features that lower their radar cross-section and keep the aircraft hidden from the enemy.

Although “the RQ-4 mission at Beale AFB has come to an end, and the 12th RS guide on will be folded perhaps by the end of this year,” said Lieutenant Colonel Michael, 4th Reconnaissance Squadron Deputy, in the Beale statement. He added that “our personnel now have new opportunities across the Air Force.”