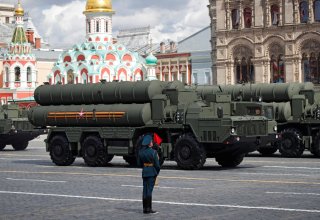 Although Russia has sustained incredible equipment and personnel losses in Ukraine, the nature of Moscow’s threat remains more or less unchanged, according to U.S. Air Force chief of staff Gen. Charles Q. Brown Jr. How is this possible? Because Moscow can still call upon a host of devastating weaponry, including a vast nuclear arsenal and significant quantities of chemical and biological weapons.

Speaking to reporters during a media roundtable, General Brown explained that “you have to look at the threat holistically,” Air Force Magazine reported. However, he added that the United States “can’t take the threat and separate … conventional and nuclear,” adding that “it’s all together.”

In fact, battlefield setbacks may have increased the likelihood of Russia using weapons of mass destruction. “The fact that they’ve struggled, conventionally, may put the risk of nuclear/chemical/bio use at a higher level,” General Brown said.

“So in some cases, it makes it a bit more unpredictable, and it puts the threat in a different context that we need to be concerned about,” he explained. Ukraine’s staunch resistance has proven to be an unexpected— and an extremely embarrassing—surprise for the Russian military.

Still, General Brown thinks that the conflict doesn’t automatically mean that the U.S. Air Force will readjust its posture in Europe or elsewhere around the globe. “If we look at the 2018 national security strategic guidance … we already focus on [China] as the pacing challenge [and] Russia as an ‘acute’ threat,” he said.

“Might there be some tweaks? I don’t see a wholesale change. Because these are things we’ve already been thinking about,” General Brown explained. “We’ve been thinking about it for the past several years as we started coming out of the Middle East.”

The war in Ukraine will undoubtedly drive some adjustments in the militaries of different countries around the globe, including the United States. The U.S. Air Force “learned some things, based on what we’re watching and what we’re seeing.”

And while it could “drive some adjustments” in future Air Force posture, General Brown doesn’t “see it making a wholesale change.”

Perhaps one of the most important lessons of this conflict is the importance of logistics. Militaries are highly dependent on essentials like food, fuel, and ammunition. The challenge of logistics is one the Air Force wants to take head-on.

Prepositioning fuel and aviation equipment, including spare parts and other servicing material, as well as food and water for pilots and maintainers in Europe, would allow the U.S. Air Force to quickly respond to challenges posed by Russia.