U.S. And Royal Navies Test F-35 Fighters Out at Sea 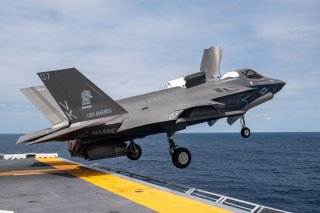 The United States Navy is taking a close look at how the F-35 Joint Strike Fighter performs while at sea following the fifth-generation airplane’s first deployment.

“We looked at those [Afloat Spares Packages] and those [Deployed Spare Packages] to see if from a range and a depth perspective, did we get it right? Did we guess that we got it about right relative to the types of parts that are going to fail? And then did we guess right when it came to the number of those parts – or number of times that those parts would fail?” Air Force Lt. Gen. Eric Fick, the program executive officer for the F-35, told reporters Tuesday, USNI News reported.

“Because the DSPs and ASPs are relatively large sets of boxes, crates of equipment and spares and we want to make sure that we minimize that footprint as we go forward within the bounds of combat effectiveness,” Fick said.

The F-35 reportedly fared well during the recent deployment. The vital information to be gleaned now is, did the F-35 have enough spare parts—and the right spare parts?

“I’m making sure that we learn from those deployments so that the next time that we can take a leaner, but perhaps more effective kit forward with us,” Lt. Gen. Fick said.

Though the deployments were an overall success, there were several anomalies.

“We actually end up seeing different results in different places, right. So while the Vinson had some corrosion that was surprising, at the same time what we saw on the Queen Elizabeth deployment was substantially less than anyone had ever imagined,” Lt. Gen. Fick explained.

“So we’re working to understand those things, to dig through them. We have folks working that with both the users and with Lockheed – the manufacturer – to try to understand the mechanisms, what might lead to the results that we saw differently on those two different platforms.”

For unclear reasons, an F-35 on both the American and British carriers fell into the sea during recent deployments. However, the issues are likely attributable to pilot error rather than any significant problems with the fighter jets themselves.

“No one has brought to me anything requiring a fleetwide notification associated with either the F-35C nor the B mishap that you’re all probably tracking from the Queen Elizabeth as well,” Lt. Gen. Fick said.

“Nothing that I have seen thus far. We continue to support the investigations in those cases and if anything comes of it that requires that fleet notification, I will absolutely do that.”