Is the Air Force Really Testing an ‘Earth-Penetrating’ Nuclear Bomb? 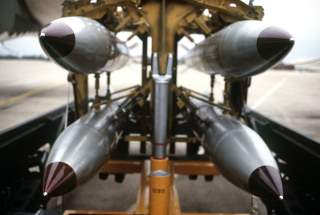 In a recent article, Eryn Macdonald repeated the stubbornly persistent misconception that the Air Force is developing a new earth-penetrating nuclear bomb. Similar analysis last summer followed a drop test of the B61-12 nuclear bomb—or “mod 12,” meaning twelfth modification or variant—from a stealth bomber. Drop tests verify the operation of various weapon subsystems, but do not include the nuclear components. The Defense and Energy Departments are developing the B61-12 to replace several old B61 variants that are slated for retirement, but the new weapon is not an earth penetrator.

Currently, the United States deploys four B61 variants. The B61-7 is considered a strategic weapon because it is carried by the B-2 bomber and can, therefore, travel intercontinental distances. Two nonstrategic variants are carried by shorter-range fighter aircraft and are deployed in Europe as part of the U.S. security commitment to NATO. The fourth existing variant, the B61-11, does actually possess an earth-penetration capability, and in this respect is unique within America’s nuclear deterrent force.

The misperception that the B61-12 will also be an earth penetrator took root with a 2016 article that Hans Kristensen and Matthew McKinzie published shortly after an earlier drop test. Video footage from the test shows the bomb impact a dry lake bed in the Nevada desert. Rather than bouncing or fragmenting in any way that is visible to the camera, the bomb disappears into the soft ground. Based on this footage, Kristensen and McKinzie concluded that the new variant is an earth-penetrating weapon designed to go after underground targets.

It is true that a pointy metal object will tend to bury itself in the dirt when dropped from an airplane. However, that does not mean that its internals are capable of surviving the impact. Analogously, the fact that the bomb would sink if dropped into the ocean does not imbue it with anti-submarine capability. Designing and building an earth-penetrating bomb is a challenging engineering endeavor that requires special measures. In particular, such weapons generally incorporate an extra heavy case to shield electronics and explosives until they penetrate below the surface and reach the requisite depth. The weight of such a case may be hundreds or even thousands of pounds. For example, the penetrating B61-11 weighs more than 400 pounds more than the non-penetrating B61-7. According to the National Nuclear Security Administration, which manages nuclear warheads for the Department of Energy, the new B61-12 weighs about 825 pounds. This is quite close to the weight of the non-penetrating B61-7 (about 760 pounds), and still more than 400 pounds less than the penetrating B61-11 (about 1245 pounds).

The Defense and Energy Departments have been fairly open about the actual purpose and role of the modernized B61-12. Some of the older variants include components that have been in the stockpile since the 1960s, and without replacement, all will become too old to remain reliable. Following the Cold War, the United States eliminated all of its nonstrategic nuclear weapons except for the B61. Modernizing the B61 is therefore critical to ensuring that the United States can still deploy nuclear weapons abroad as a tangible element of its nuclear umbrella. Extending deterrence in this way serves not only to defend America’s allies in Europe and Asia, but also to help assure them that they do not need to develop nuclear weapons of their own.

The Obama Administration developed a warhead modernization plan under which the B61-12 would eventually become the only nuclear gravity bomb in the U.S. stockpile. This required giving it greater accuracy so that it can fill the role of existing variants with higher as well as lower explosive yields. Greater accuracy offsets lower yield because a bomb that can get closer requires a smaller explosion to destroy its target.

The B61-12 cannot, however, replace the B61-11 because fulfilling that role would require an earth penetration capability. For years, official reporting and documents carefully noted that the B61-12 will consolidate and replace all existing variants except for the earth-penetrating B61-11, but that the United States would also retire the B61-11. More recently, the Trump administration’s 2018 Nuclear Posture Review left the door open to delaying the retirement of the B61-11 precisely because it provides a capability that the B61-12 does not.

As both the Obama and Trump administrations have explained, the B61-12 is necessary to sustain a gravity bomb in the U.S. nuclear deterrent force. However, the new variant is not an earth penetrator and therefore cannot deliver all the capability that existing variants afford. Sustaining such a capability benefits deterrence, but relying on other means of holding hard and deeply buried targets at risk might nonetheless be preferable. If America would be better off without an earth-penetrating nuclear bomb, then the B61-12 is not the problem. If earth penetration capability is worth retaining, then the upgrade now underway is not the solution.

Dr. Aaron Miles is a Fellow at the Center for Global Security Research at Lawrence Livermore National Laboratory. He served previously as a Senior Policy Advisor on Nuclear Deterrence in the Office of the Secretary of Defense. His expertise includes nuclear policy and strategy, strategic stability, and arms control.