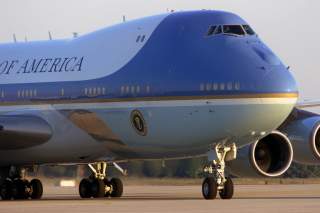 The Air Force is being tightlipped about a proposal from rap artist Kanye West to replace Air Force One – currently made by Boeing – with a hydrogen-powered iPlane that he claims could be produced by Apple.

For decades, the Air Force has performed the solemn duty of ferrying the president around the world. Boeing has a $3.9 billion contract to deliver two 747s to serve as the president’s official plane.

But during his meeting with President Trump on Thursday at the White House, West showed the president a picture of the aerial vehicle on his iPhone.

“I brought a gift with me right here,” the famous singer said. “This right here is the iPlane 1. It’s a hydrogen-powered airplane, and this is what our president should be flying in. We’re going to have Apple, that American company, work on this plane.”

When Task & Purpose asked the Air Force about West’s suggestion, the service declined to say whether it would consider making the iPlane One the president’s official ride.

“The Air Force is dedicated to providing the Office of the President of the United States with safe, reliable air transportation that provides all required mission capabilities to execute the constitutional responsibilities of Commander in Chief, Head of State, and Chief Executive,” the service said in a statement on Thursday.