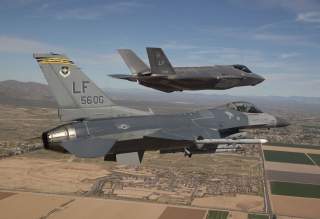 That could be part of the impetus behind the Pentagon's long-range plan for U.S. airpower, according to an analysis by the Congressional Research Service (CRS).

Every year the Department of Defense puts out a thirty-year plan outlining its vision for the future course of American airpower. Usually it's a vague document.

But not this time. "The most recent 30-year aviation plan released in April 2018 is full of details on specific programs, including cancellations, life extensions, and new starts," writes Congressional Research Service analyst Jeremiah Gertler. "Some are explicit; others, between the lines."

Gertler discerns some patterns in the airpower plan, particularly regarding the F-35. He points to the Air Force's intention to extend the life of the F-15E Strike Eagle attack aircraft as well as the F-16 fighter, even though the F-15C air superiority fighter is being retired.

"What do the F-15E and the F-16 have in common?" Gertler asks. "They are both slated to be replaced by the F-35 Lightning II. This new plan may show the Air Force hedging in case F-35s do not arrive as fast as hoped and thus has to extend existing airframes to fill the gap. The target quantity of F-35s has not changed; the Air Force still expects to buy 1,763. But in case they do not arrive as quickly as anticipated, the Air Force seeks to update its older aircraft."

In addition, the A-10 Warthog will keep flying until the 2030s, which again leads Gertler to suspect that the Air Force is hedging its bets against delays in the F-35 program. Similarly, the plan also calls for the Navy to extend the life of its F-18 Super Hornets, though the older F-18A-D models will be retired. This suggests the Navy is bracing for more F-35 woes.

A sixth-generation fighter concept next year. The Navy and Air Force expect to map out the parameters of their sixth-generation fighter in 2019. "Although this system is likely decades away in terms of full-rate production, it is a program on which people have been doing a lot of conceptual thinking, and the Navy is saying that within the next year, that thinking is done," writes Gertler. "Actual proposals may be the next step."

More KC-46 tankers. The Air Force wants more than the planned 179 KC-46 Pegasus tankers. "In this plan, the Air Force reveals a conclusion that the existing program is not enough, announcing an intention both to buy more KC-46s than anticipated and to continue to upgrade the existing KC-135s," Gertler points out. "The previous intent was to retire KC-135s, but now the Air Force seeks to make them last longer instead."

No new long-range tanker. The aviation plan also revealed that the KC-46 will replace KC-10 tankers, which Gertler takes as evidence that the Air Force is abandoning plans for a new long-range tanker. "When the Air Force began modernizing tankers, it announced three programs," Gertler explains. "The first, called KC-X, was a competition between Airbus and Boeing to provide 179 tankers to replace KC-135s. A follow-on program, called KC-Y, was mainly intended to buy another 179 of whatever tanker won KC-X. A third program, called KC-Z, would have built a new, bigger tanker from scratch to replace the fifty-nine KC-10s. This new plan implies that the KC-Z program has gone away. KC-46 is an active and growing program, but it now appears the program’s future is more promising than originally anticipated."

The AWACS will keep flying. Plans to retire seven E-3 Sentry airborne control aircraft will be shelved. The Air Force will also continue flying its C-130s, but not acquire any more C-130Js. The Navy also intends to buy a few C-130s.

A new VIP transport. "Another unexpected initiative is the Air Force’s intent to replace its handful of C-32 VIP transports, based on the Boeing 757," Gertler writes. "As the 757 has been out of production for 14 years, a new aircraft may be expected to meet this requirement."

More Poseidons. Interestingly, in light of rising tensions with Russia and China, the Navy hints it may buy P-8 Poseidon patrol aircraft: “Given the recent geopolitical changes, additional aircraft may be required," the aviation plan says.

A new Navy trainer. "Another new start program that was not in previous service budgets, but announced in the 30-year plan: to replace the T-44 fleet the Navy uses for training, based on the civilian Beechcraft King Air," writes Gertler. "The Army intends to do something similar."

A new Navy helicopter. Given changes to planned ship procurement, the Navy will have more helicopters than its ships can carry. Yet "by 2030, with more ships coming into the fleet, the Navy expects to need many more." Gertler writes. The Navy says that normally, it would buy them now and keep the production line warm. "Instead, the Navy says it wants to start with a clean sheet of paper," Gertler notes. "The concept is to acquire a new helicopter in the mid-2030s based on the next generation of vertical-lift technology, perhaps informed by the ongoing joint program with the Army to develop new vertical-lift platforms. As the Navy is looking for a brand-new helicopter, if it has to be in the fleet in the mid-2030s, the program is likely to start within three or four years."

The venerable CH-47 Chinook will keep flying. "Because the Army’s new future vertical-lift aircraft does not yet have a heavy variant (and is part of an early technology program that may not yield usable airframes for 20 years), the Army intends to do remanufacturing on the Chinook fleet to extend its life another 15 to 20 years," Gertler writes.

Used Blackhawk helicopters for sale. Gertler believes the Army may be releasing some of its UH-60 Blackhawk helicopters for civilian use. The aviation plan says the Army will send some Blackhawks back to manufacturer Sikorsky for refurbishment. "The plan does not say whether that means they’re to be remanufactured for U.S. service or, as part of the deal for new helos, Sikorsky is to get the old airframes back and can fix them up and sell them to someone else," Gertler writes. "But it does seem the U.S. government is preparing to put a bunch of used airframes on the market."

However, the CRS analyst also warns that all this may be a Pentagon ploy to get more money. "These proposals also arrive in the context of a two-year congressional agreement to raise the defense budget caps," Gertler concludes. "The military services may be seeking to extend that spending level, and to send a message to Congress of where maintaining higher spending may lead—in essence, publishing an unfunded requirements list in a different guise."