An Aircraft Carrier Armed With Nuclear Weapons? Why the Navy Said 'No Way' 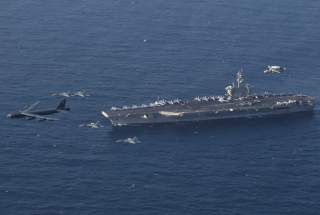 In the United States, it was assumed that nuclear weapons would be widely employed in future conflicts, rendering conventional land armies and fleets at sea irrelevant.

(This article appeared earlier this year.)

In April 1949, just five days after CVA-58’s fifteen-ton keel was laid down in Newport News, Virginia, Johnson canceled the mega-carrier. He also began advocating dissolution of the Marine Corps, starting by transferring its aviation assets to the Air Force.

(This article appeared last month and is being republished due to reader interest.)