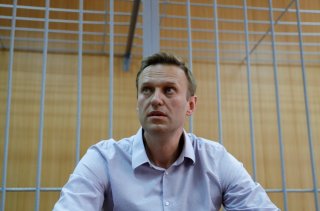 Alexei Navalny, Russia’s most high-profile political dissident, faced the beginning of his latest trial in a penal colony near Moscow on Tuesday.

The trial, which has been criticized as an attack on one of Russian leader Vladimir Putin’s political enemies, was not open to the public, but it was videotaped inside Penal Colony Number Two in the Russian town of Pokrov. The video showed Navalny and his wife, Yulia Navalnaya, accompanied by a guard as he addressed the judge.

In his remarks, Navalny criticized the proceedings, claiming that the charges against him were “fabricated” and accusing Russian authorities of being “scared” of the potential reaction to the prosecution if the trial was held in a public setting. Navalnaya, who received special dispensation to attend, claimed on Instagram that the new charges were “so pathetic they are afraid to hold the trial in Moscow.”

Navalny, who served a short prison sentence earlier in the decade for fraud, was poisoned in August 2020 while on a domestic flight. He was flown to Germany for treatment, where it was discovered that the toxin he had been poisoned with was similar to “Novichok,” a Russian nerve agent infamously used in the poisonings of Sergei and Yulia Skripal in 2018.  That revelation led to widespread suspicion that the Kremlin had ordered the attempt on Navalny’s life.

On his return to Russia, Navalny was arrested for violating his parole conditions by traveling to Germany. Initially imprisoned in Pokrov for the parole violation, he was later charged with an additional count of fraud for allegedly spending around $4.8 million of his foundation’s money on personal needs. If found guilty, Navalny could face an additional fifteen years in prison.

Amnesty International described the legal case against Navalny as a “sham trial” and criticized the choice of venue for excluding media outlets. “It’s obvious that the Russian authorities intend to ensure that Navalny doesn’t leave prison any time soon,” the group wrote in a statement on Monday.

Some of Navalny’s supporters have alleged that the trial was intentionally scheduled to take advantage of the public’s focus on the ongoing Russo-Ukrainian crisis, in which 130,000 or more Russian troops have been deployed to the Ukrainian border.

Putin and his allies “are planning to extend [Navalny’s] sentence for another 15 years while everyone’s distracted with something bigger,” Maria Pevchikh, a senior member of Navalny’s Anti-Corruption Foundation, wrote on Twitter.