All of the Reasons China's Military Is a Paper Tiger 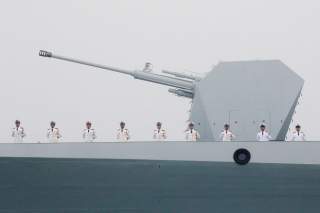 “In appearance it is very powerful, but in reality it is nothing to be afraid of—it is a paper tiger.”—Mao Zedong on the United States, 1956

China’s rise over the past 30 years has been nothing short of spectacular.

After decades of double-digit growth, today China is the world’s second largest economy—and possesses an increasingly sophisticated military that’s among the planet’s most powerful. Despite China bordering a number of unstable countries, its borders are secure.

That wasn’t always the case. In 2,000 years, China has suffered invasions, revolutions and humiliations from the outside world—plus its own internal rebellions. It has been brutalized, conquered and colonized.

China’s military buildup, along with an aggressive foreign policy, has inspired a fair amount of alarm in the West. Some American policymakers consider Beijing to be Washington’s only “near-peer competitor”—in other words, the only country with the military might to actually beat the U.S. military in certain circumstances.

But they’re wrong. Even after decades of expensive rearmament, China is a paper dragon—a version of what Mao Zedong wrongly claimed the United States was … in 1956.

China’s military budget has grown by double-digits year after year, but inflation has eaten away at the increases. China’s army, navy, air force and missile command are wracked by corruption—and their weapons are, by and large, still greatly inferior to Western equivalents.

Yes, the People’s Liberation Army is slowly becoming more technologically advanced. But that doesn’t mean Beijing can mobilize its armed forces for global missions. Unlike the world’s main expeditionary powers—the United States and the U.K., to name two—China is surrounded by potential enemies.

Russia, Japan and India are all neighbors … and historic adversaries. China’s aggressive foreign policy targeting smaller states isn’t encouraging submission but resistance, as countries such as The Philippines and Vietnam ally with the United States, Japan and India.

China’s other neighbors are weak or failed states, such as Pakistan and North Korea. Their instability—or their outright collapse—could have serious security repercussions for China, and help explain why Beijing lavishes funds on its armed forces.

China has the world’s largest military, with no fewer than 2.3 million men and women in uniform. Another 800,000 people serve in China’s reserves and militias.

The PLA ground forces number 1.25 million men and women divided into 18 group armies, each similar to an American corps. Each army consists of three to five infantry and mechanized divisions—China has only one tank division.

Unique to the PLA is the Second Artillery Corps, a separate branch of the military in charge of land-based conventional and nuclear missiles. The Second Artillery includes between 90,000 and 120,000 personnel divided into six missiles brigades.

Yes, China’s spending seems like a lot. But it’s not, really—especially considering how dangerous China’s corner of the world can be.

It’s probably difficult to walk through Beijing’s most prosperous neighborhoods or Shanghai’s glittering streets and grasp that you are in a country that borders three of the most unstable places in the world—Pakistan, Afghanistan and North Korea.

After thousands of years of incursions and invasions, China has finally built up strong borders. Beijing is doing a good job of maintaining peace and relative prosperity in a rough, impoverished neighborhood.

“China’s land borders have never been more secure than they are today,” M. Taylor Fravel, an associate professor of political science at the Massachusetts Institute of Technology, told War is Boring.

“Although disputes with Bhutan and India remain, China no longer faces the prospect of a significant threat on land,” Fravel continued. “Clashes could occur on the border with India, but they would be contained by geography and unlikely to escalate into a wider war.”

This hasn’t always been the case. Invaded by the Mongols, the Russians, Western colonialists and most recently Japan, China suffered greatly at the hands of outsiders for millennia. Given this history, it makes sense that Beijing would want strong defenses.

Vietnam fought China in 1979 and killed 9,000 People’s Liberation Army troops in a single month. Japan’s occupation of China in the 1930s and ’40s killed millions of Chinese. India fought China as recently as 1962. China and Russia waged a short, undeclared war in 1969.

China borders 14 countries, tying Russia for the most neighbors. But while many of Russia’s neighbors are peaceful—Estonia, Finland, Norway and Latvia come to mind—China borders Afghanistan, North Korea, Myanmar and Pakistan. Two of these states have nuclear weapons.

North Korea is particularly dangerous. Not only does it practice diplomacy through spontaneous violence, it has nukes. Nobody knows when—or if—the North Korean government will collapse, but the idea of 24 million starving people suddenly finding themselves without a government is a frightening one for Beijing.

Last year we found out China has contingency plans to deal with a post-collapse North Korea. That would likely involve the PLA moving into North Korea to set up a buffer zone. Perhaps in reaction to this disclosure, Pyongyang described Beijing as a “turncoat and an enemy.”

China is experiencing a prolonged period of peace and prosperity unprecedented in its modern history. At the same time, its neighborhood headaches are as numerous as ever. That’s one good reason China’s military budget is $188 billion a year and rising.

At the same time, China is remarkably lacking in real, dependable allies. In the Pacific alone, the United States can count Japan, Taiwan, Australia, South Korea, New Zealand and The Philippines as close allies—and maintains cordial relations with others including Malaysia, Vietnam and Indonesia.

China’s list of allies in the Pacific, on the other hand, is a short one. Russia. Globally, China’s allies include Pakistan, Zimbabwe, Venezuela and the countries of the Shanghai Cooperation Organization—Pakistan, Kazakhstan, Kyrgyzstan, Tajikistan and Uzbekistan. All are despotic or near-despotic states, many are unstable and many have long records of human rights abuses.

Beijing embraces its worst neighbors in part to keep them in check. This worked with Pakistan, but failed with North Korea. In Myanmar, China cozied up with the oppressive military regime only for it to suddenly open up and seek ties with the West and Japan. China’s net gain was years of condemnation for supporting the junta—which is to say, a net loss.

Where China has really failed, however, is in simply getting along with nearby countries. Before the recent confrontation with The Philippines over the Ayungin Shoal, relations between Manila and Beijing had never been better. The same went for much of Southeast Asia before China declared sovereignty over 90 percent of the South China Sea.

Even relations with Japan, China’s historical enemy, were cordial if staid.

Sometime around 2010, Beijing decided to stop playing nice. China began pushing long-dormant territorial claims—and tried its hardest to split the alliance between Japan and the U.S. China’s relations with pretty much every country in East and Southeast Asia have chilled.

It’s hard to say what China really hoped to gain. Some argue that China is attempting to “Finlandize” smaller Asian states—that is, intimidate them into expressing neutrality in order to deny them to the Americans. Others argue that China wanted those disputed territories but also fundamentally has a problem with treating other countries as equals.

Whatever the case, China’s recent actions have left it largely friendless. Today its most important relationships with other countries are strictly economic in nature.