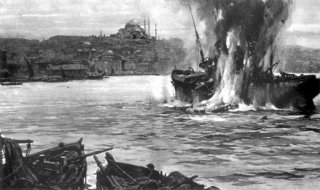 During the First World War, British and French military leaders—including the then First Lord of the Admiralty Winston Churchill—came up with a bold, but ill-fated, plan to sail up the Dardanelles in northern Turkey to gain control of the strategic straits that separated Europe from Asia. The Allies' goal was to capture Constantinople and knock the Ottoman Empire out of the war, while also gaining access to the Black Sea and opening a vital supply line to Imperial Russia. Quick success was also expected to bring the Balkan nations of Greece and Turkey into the war on the Allied side.

Even on paper, the plan was anything but sound—as it involved sailing an Allied flotilla up a narrow sixty-mile long strip of water that was heavily mined, which was also protected by Turkish guns at the mouth of the waterway.

On February 19, 1915, the British and French ships began their naval assault. To say that nothing went as planned is a huge understatement. Part of the problem was a Royal Navy had conducted a raid of the Dardanelles the previous November. At that time, the British warships might have been able to steam up the straits and shell Constantinople – but the raid actually was conducted to test the range of the Turkish guns, and because the Royal Navy didn't press on, its attack simply alerted the Turks to the vulnerability.

In that time between raids mines were laid, guns were better positioned and searchlights installed to sweep the narrows at night.

When the attack was finally launched it actually began well for the Allies. The day was calm, with no wind and the sun shining. The warships moved into position and opened fire on the old Ottoman forts guarding either side of the straits. It seemed almost too easy, but then the Allied warships sailed to within just three kilometers of the shore. That is when the Turkish gunners fired back, making it clear the forts weren't destroyed.

Over nearly a month, from February 19 to March 17, 1915, the British and French naval forces attempted to subdue those Turkish forts and mobile howitzer batteries that had been put in place.

Failing to subdue the forts in previous efforts, on March 18 a far larger attack was launched. Along with support and reserve ships, it was a powerful force—certainly the most capable naval flotilla to mount such an attack up until that point.

Throughout the morning on March 18, the Turkish gunners stood their ground, firing round after round while the warships returned fire. It was a slug match for the ages, and it appeared the Allies had the advantage.

Even as the warships took damage, the Turkish shells had been unable to pierce the main armor of the battleships. That is when the British Admiral John de Robeck ordered the last line of battleships forward, while the second line turned to allow the other ships to pass.

However, disaster struck when the French battleship Bouvet hit a mine and sank within minutes. More than 600 sailors were lost. By late afternoon, the battlecruiser Inflexible was damaged as were the French battleships Gaulois and Suffren. Even worse, the Royal Navy's HMS Irresistible and HMS Ocean were sunk. The wrecks of those warships, which have rested in the shallow waters of the Dardanelles for more than 100 years, are now open to divers.

With half the fleet out of commission, by the end of March 18, the Allies pulled back. Churchill had called for the attack to be renewed. And while it was believed the Turks were dangerously low on ammunition—which wasn't actually true—the fact remained that the minefields were intact.

The bold plan to sail up the Dardanelles had failed. Instead of a continued naval attack, another plan was devised: a ground invasion of the Gallipoli Peninsula. It of course ended in disaster as well.

The Dardanelles Campaign, like so many bold plans mounted during the First World War, was ill-conceived and likely doomed to failure from the beginning.