The Amazing History of Gun Control in the America 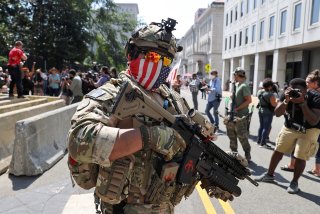 The Second Amendment is something that has been debated for years, in part because of the way it is worded – with supporters saying that it ensures the "right to own" a firearm, while opponents saying that the Founding Fathers intended for it to mean a militia and that at the time of its writing couldn't have conceived of the weapons that would eventually be developed.

“A well regulated Militia, being necessary to the security of a free State, the right of the people to keep and bear Arms, shall not be infringed.

Some Second Amendment supporters maintain that Congress has already infringed on the right to own firearms. Throughout much of the history of the United States, however, citizens could pretty much own anything that the military had—and in some cases, private citizens had firearms superior to what the U.S. Army carried. This was certainly true in the early post–Civil War era when the U.S. Cavalry carried the slow-to-load single-shot Springfield Model 1873 “Trapdoor,” the first standard-issue breech-loading rifle adopted by the U.S. military.

That rifle was carried by Lt. Col. George Custer’s troopers at the Battle of the Little Bighorn while the Lakota and Cheyenne fighters carriers repeating rifles, including the Henry Rifle and Winchester Model 1866. While the U.S. military did not sell certain firearms—such as the Browning Automatic Rifle—to the general public, other weapons, such as the Thompson submachine gun were marketed to civilians.

All that changed in 1934 and since then there has actually been a series of gun control measures in the United States.

This was the first actual national gun control legislation and it came about due to gangland crime and President Franklin Delano Roosevelt’s “New Deal for Crime.” One of the misconceptions is that it made firearms such as “machine guns” illegal when, in fact, it simply required more extensive background checks and imposed a $200 tax—a transfer fee of sorts—to transfer the ownership of such weapons.

In addition to machine guns (such as the Thompson) the NFA also imposed a tax on the manufacture, sale and transportation of firearms that included short-barrel shotguns and rifles and silencers/suppressors. It is also worth noting that the $200 tax has not gone up in the past eighty-six years.

Currently, machine guns are legal to own in thirty-seven states, but purchasers must undergo a rigorous background check that includes providing fingers prints and can take several months for approval.

It was only in 1938, with the passage of the FFA that required gun manufacturers, importers and dealers to obtain a federal firearms license. The FFA also defined a group of people that included convicted felons as those who could not purchase firearms. The law also mandated that gun sellers must keep customer records.

A year after the passage of the FFA the U.S. Supreme Court actually heard the first case involving gun control in United States v. Miller. 307 U.S. 174. The Court determined that Congress could regulate an item such as sawed-off shotgun that had moved in interstate commerce under the National Firearms Act of 1934 because the evidence did not suggest that the shotgun “has some reasonable relationship to the preservation or efficiency of a well-regulated militia.”

The GCA actually repealed the FFA—and it came about after the assassinations of President John F. Kennedy, Sen. Robert F. Kennedy and Dr. Martin Luther King, Jr. It updated Title II of the NFA and added “destructive devices” to be included as items that required a transfer stamp. It also banned the importation of firearms that had “no sporting purpose” and also imposed age restrictions for the purchase of handguns.

The law also banned felons, the mentally ill, and others from purchasing firearms and further required that all manufactured or imported firearms had serial numbers. As a result of the GCA the Internal Revenue Service’s Alcohol and Tobacco Tax Division (ATTD) became the Alcohol, Tobacco and Firearms Division. Only in 1972 was the ATF officially established as an independent bureau within the Treasury Department.

Interestingly the GCA included a machine gun amnesty program, which allowed weapons that hadn't been registered to be officially “papered,” provided the owner paid for the transfer stamp. That was the last amnesty of such weapons.

Passed by Congress in 1986, this law enacted what were seen as protections for gun owners and prohibited a national registry of dealer records, limited ATF inspections of dealers to once a year and allowed licensed dealers to sell firearms at gun shows.

However, despite being named a "protection act" it was anything but for machine guns. The bill expanded the GCA to prohibit civilian ownership or transfer of machine guns made after May 19, 1986, and redefined “silencer” to include parts intended to make silencers. As a result of the FOPA, the price of machine guns has continued to climb

This was signed into law in 1993 by President Bill Clinton and amended the GCA to require licensed dealers to conduct background checks at the time of purchase. It established the National Instant Criminal Background Check System (NICS), which is maintained by the FBI.

The law was named after White House press secretary James Brady, who was permanently disabled after he was shot during an attempt to assassinate President Ronald Reagan in 1981.

This bill included a provision was known as the “Assault Weapon Ban,” which was a temporary prohibition that banned the sale to manufacture, transfer or possess a semi-automatic “assault weapon,” unless it was “lawfully possessed under Federal law on the date of the enactment of this subsection.”

Protection of Lawful Commerce in Arms Act of 2005

Signed into law by President George W. Bush in 2005, this act prevented gun manufacturers from being named in federal or state civil suits by individuals who may have been the victims of crimes involving firearms made by that company.

Three years later the Supreme Court heard the case District of Columbia v. Heller, which changed the nearly seventy-year precedent set by Miller in 1939. Whereas the Miller ruling had focused on the "militia" portion of the Second Amendment, in 2008 the court focused on the “right” to possess a firearm that was unconnected with service in the militia.

As Cornell Law School noted, “The plaintiff in Heller challenged the constitutionality of the Washington D.C. handgun ban, a statute that had stood for thirty-two years. Many considered the statute the most stringent in the nation. In a 5-4 decision, the Court, meticulously detailing the history and tradition of the Second Amendment at the time of the Constitutional Convention, proclaimed that the Second Amendment established an individual right for U.S. citizens to possess firearms and struck down the D.C. handgun ban as violative of that right.”

However, the majority also carved out Miller as an exception to the general rule that Americans may possess firearms, claiming that law-abiding citizens cannot use sawed-off shotguns for any law-abiding purpose.  In addition, the Court in its dicta found regulations of similar weaponry that cannot be used for law-abiding purposes as laws that would not implicate the Second Amendment. Further, the Court suggested that the United States Constitution would not disallow regulations prohibiting criminals and the mentally ill from firearm possession.